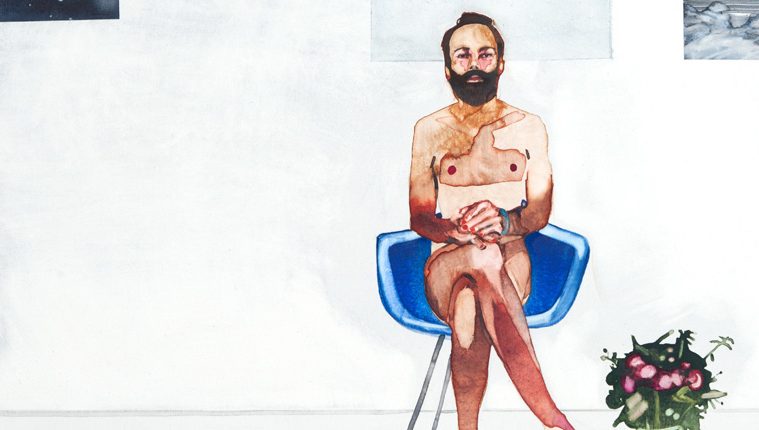 Rich oils and delicate watercolors don the walls of the newly opened David Shelton Gallery. Verdant foliage and cascading waters are juxtaposed against interior scenes. A nude man lounges in a rose colored daybed, looking to the viewer. Joey Fauerso’s Interior addresses us personally and invites us into a softer, symbolic world.

Fauerso sets out in Interior to blur boundaries. The imagery in the exhibition appears to exist in two distinct locations: out in nature, or in a sparse interior space. The artist generates a sense of unity through mixing and matching motifs in conflict.

The waterfall, a favorite motif, is given possibly more precedence in the exhibition than her human subjects. In her diptych Yosemite Fall, the left image is a grisaille watercolor of a waterfall with reticulated washes to describe the craggy mountains, and a soft haze obfuscates the base of the fall. The right image isolates the waterfall’s shape as a white form on a black field, both graphic and stark. Simultaneously passive and dominating, the waterfall embodies the dissonance Fauerso seeks.

However, the artist also blends distinctions between organic and synthetic, interior and exterior. Her nature images reappear within interior settings as pictures on the wall, reminding us that these images are synthetic approximations of nature.

Fauerso creates a clinical space for her model to inhabit – grey-white walls, with a slightly darker floor. This spartan grounding makes every form in this space emphatic. In her diptych Seljalandsfoss, the artist introduces the recurring male figure seated in a blue chair next to a flower vase, a waterfall painting hanging near him. Her subject wears subtle high heels on his daintily crossed legs, a bracelet on his wrist, and a full beard. Fauerso avoids making the scene garish or comedic, instead creating an earnest effect that encourages curiosity.

In the right panel, Fauerso complements this gender ambiguity with a still life of the flower vase. The still life first encourages us to compare the vase forms of the two paintings; then the relationship between the vase and the waterfall image on the left panel becomes apparent. The image of the waterfall painting stands as an intense, but fabricated nature scene, while the flowers are authentically natural, but equally removed from nature.

Subverting distinctions between natural and synthetic, as well as masculine and feminine, Fauerso’s examination sheds light on how arbitrarily, yet powerfully, gender defines our world.