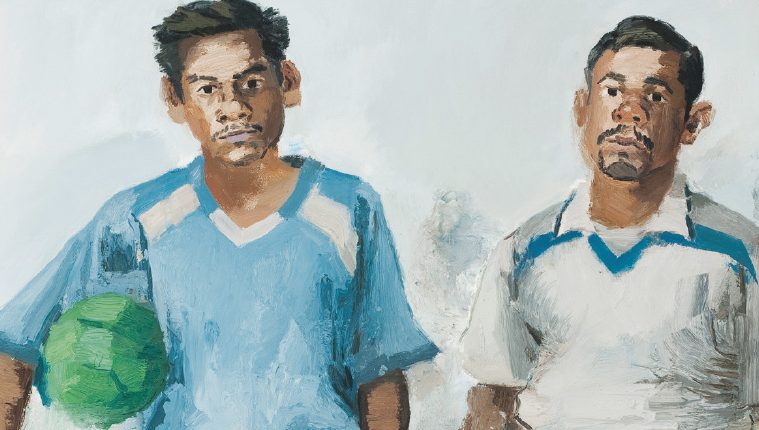 THE PHRASE “PAINTING FROM life” can bring to mind a host of images produced by the working artist — fruit-filled still life arrangements positioned as a table centerpiece, treat landscapes created plein-air on the side of the road, or bar scenes as viewed from the corner booth. But day workers and soccer players modeling in the artist’s studio?

Over the years, John Sonsini has painted from life — portraits of men whom he identifies as Los Angeles “day workers,” nearly exclusively Latin men who gather on street corners, in hardware stores or similar, inquiring about daily for-hire work. Though their range of skills can be applied to construction and other labor-intensive tasks, Sonsini proposes a competitive wage for five-hour workdays as his studio model. A day-worker’s consistent availability in concentrated amounts of time is especially advantageous for Sonsini. And for anyone who has had to sit or stand still for any length of time, you can respect the amount of rigorous work that goes into modeling.

“My practice of working with men who are not professional models really began in the mid-1980s when I met so many of my sitters at the legendary Athletic Model Guild studios, known for their raw and racy nudes of streetwise guys,” says Sonsini.

While working for five hours a day for several days at a time, Sonsini’s workers must handle not only the mental rigor of staying focused while modeling but also deal with the physical strain. It is important that all parties involved, including Sonsini, are as comfortable as possible. So while he usually determines if he wants the sitter to be standing or seated, allowing him with continual, unobstructed views of their face, hands, feet and torso, Sonsini leaves it up to the them to adopt a position that will be comfortable while allowing him unobstructed views of their faces, arms, feet, and torso. Therefore, most often the portraits depict men standing with feet shoulder-width apart, arms crossed at their chest or hands in their pockets, and relaxed facial expressions.

Many times the nuances of this process may be overlooked. Imagine the exchange that unfolds between an artist and his model over the course of several days: behind-the-scenes conversations, the initial awkwardness of sitting with a stranger and the eventual level of familiarity, the intimacy of watching someone work, and knowing you are being watched (for both the painter and the sitter). Sonsini explains, “I am trying to capture an immediacy within the making of a painting and the building of an image.”

This capturing, making, and building is illustrated by his subject’s frontal positioning, the weight of his brush strokes, his color mixing and paint application, and the non-hierarchical relationship between the figure, ground, and minimal pictorial elements. And though it is concern for his model’s comfort that mostly drives Sonsini’s composition, a viewer’s read of various suggestive psychological or emotional states is somewhat unavoidable — especially given their physical stance, body language, and Sonsini’s tendency to exaggerate the size of their hands and feet. Simply put, he says, “One rarely decides to paint a subject for the same reasons that others want to look at it.”

Similar in spirit to his day-worker compositions — which include minimal personal elements such as a suitcase, a hat, or table — is a new body of work portraying men who play soccer (“futbol”), a very popular past time in Los Angeles. The compositional depiction of his models in uniform and with a soccer ball suggests a weighted importance to what these men carry on their backs and in their arms.

He recalls, “Kerry Inman and I discussed the possibility of doing a solo show of my work. In the end, I wasn’t able to spend the kind of time away from Los Angeles that would have been necessary for the sort of Houston project we’d been discussing. So, instead we decided to proceed with the show but I’d paint all the work in LA.”

He adds, “I’ve visited Houston on several occasions. I love the city. I feel certain that at sometime in the future I will return to make paintings in Houston.”

— NANCY ZASTUDIL
Nancy Zastudil is an itinerant curator who can’t seem to stay away from Houston.