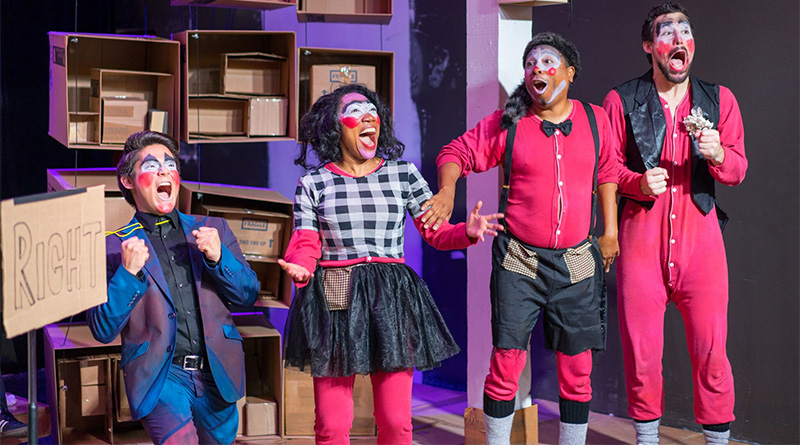 As a theater critic, that’s part of the job, but in this case the fools, or to be precise, one master of ceremonies Fool (Brendon Duran) and four helping fools, the cast of Horse Head Theatre’s production of Judgement of Fools, directly requested that judgement. So, since they asked for it. . .

Like all theater, Judgement of Fools, (through Nov. 12) wouldn’t exist without an audience. Actors hate to play to empty air, but this play needs audience participation and interaction in order to proceed beyond the first line. Indeed, it requires the audience to render judgements loudly aloud and throughout the performance instead of in a complaining or complimenting voice during the car ride home.

Audiences enter the Rec Room theater space with the show already in progress and we’re asked to write our names upon the side wall to make our presence known. The play holds no real beginning and where it all ends is rather murky as well, but like life it’s all about the middle journey. In the case of Fools, the journey meanders an intriguing path, but sometimes gets lost in dead ends along the way.

As directed by Philip Hays, who joined in on the action in the performance I attended, five nameless but numbered fools (Jason Duga as Fool 2, Callina Situka as Fool 3, Ronnie Blaine as Fool 4 and Callina Situka as Fool 5) spend the next 90 minutes asking for the audience to judge them and society in general as they act out relationship scenarios, play racial stereotype games, take social media breaks and give the audience points to win a box of “free shit.” None of these skit-like scenes are exactly the same, with one resembling a game show, the next an acting or improv exercise, the next a drunken bookclub meeting, and, depending on the audience, one or two probably devolving into an episode of the Jerry Springer Show.

Fools has been performed in New York and Los Angles, but it’s obvious playwright Bernardo Cubría has at the very least made tweaks for this Horse Head production because some of the fools’ cultural references seemed only a few days old. The fools ask for our opinion and each performance will be different as audience members render their own judgement to questions of sexism, racism, politics and fame.

For people who don’t like traditional theater and the artifice of watching a live performance while everyone pretends that invisible fourth wall separates audience and actor, Judgement of Fools will likely be an excellent night of theatrical experiences for them, as the fools try to get the audience to think and voice their own opinions on a myriad of topical issues. But, as someone who delights in both traditional and interactive theater, I accuse and judge Fools of avoiding perhaps the most interesting question the title raises.

About mid-way through the show Situka’s Fool 3 poses a sexual ethics question and asks us to render judgement on her as a slut or not a slut. With great vulnerability–so much so that we forget for a few moments this is an actress playing a fool playing a what-if scene–she tells us her story of one night of drunken passion with a married friend. She then pleads for the audience to pile their judgements upon her. The crowd I saw the show with did not hesitate to argue for both a guilty and not guilty slut verdict. At this point, I had to render my own silent judgement, not on Fool 3 but on Cubria instead, as I wondered why these fools would so desire our reckoning.

The court jester/Shakespearean fool of history tended to speak truth to power in the guise of entertainment, but these fools appear the opposite, lost and helpless without the wise, stupid and sometimes drunken (depending on the night) opinions from the audience, and we were all left with many audience conversations that just tapered off with no resolution or cut off in time to move on to the next scene.

With Judgment of Fools perhaps the question should not be who is the fool and who is the judge, but why do we crave to judge and to be judged at all? This might be a central question for this production, but it’s one never really explored in the fools’ rush to move on to the next current issue and closer to opening that box of free shit. These foolish antics entertain and will likely leave the audience pondering, but whether they’re pondering basic questions of humanity or if the Rec Room bar is still open, I’m a lost fool to say.