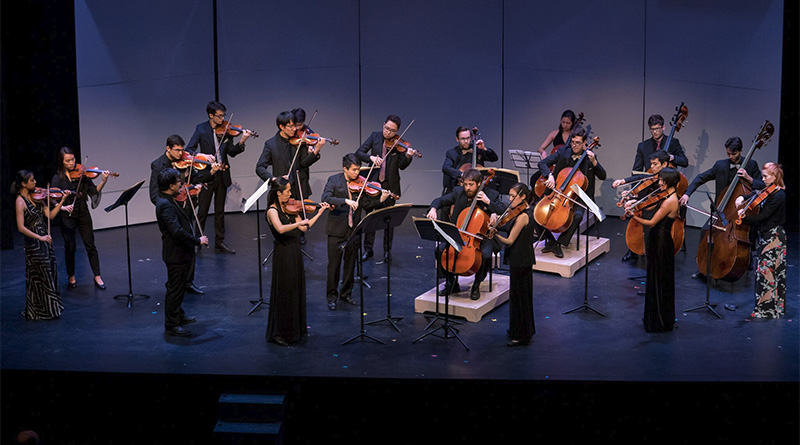 Thoughtful, incisive programming has been KINETIC’s strong suit since its inception in 2015. The Houston-based conductorless ensemble’s winter concert, “Inner Voices,” (Jan. 21 at MATCH) was no exception in that regard. Four works by four English composers—Edward Elgar, Ralph Vaughan Williams, Benjamin Britten, giants of 20th century English music, and contemporary composer Anna Clyne (b. 1980)—illustrate the breadth and poetic beauty of this often under-appreciated repertoire. The programming also showcased the diverse facets of the flexible ensemble, featuring a solo string quartet with string orchestra, a more intimate string quintet, a double concerto, and a collaboration with guest artists.

The majestic, full sonority of strings in concert, striding resolutely downward in the opening measures of Elgar’s Introduction and Allegro (1905), set the tone for the evening right away. Inspired by the Baroque concerto grosso form à la Handel, Elgar scored the work for solo string quartet (concertino) and string orchestra (ripieno). This expanded texture allowed multiple melodic ideas to be passed back and forth, weaving a rich tapestry of sound. What was truly impressive was how effortlessly the ensemble handled the frequent tempo, mood, and thematic changes throughout the piece. First violinist of the featured quartet Muchen Hsieh is a natural leader. She was so expressive and musical in her movements that the piece, and her bow, literally took flight. She imbued the rising melodic figure with a sense of freedom and optimism, and that joy was contagious. We go on a wild ride with KINETIC– savoring a tender melodic phrase that gradually gathers intensity in one moment; an echo of a Welsh tune, first rendered simply and introspectively by violist Tonya Burton, come into full bloom the next; and in the middle of it all, a fiendish fugue brilliantly executed. The piece, with all its technical and musical challenges, shows off the virtuosity of this ensemble to a T.

Ralph Vaughan William’s Nocturne and Scherzo (1904-06) for string quintet is so rarely performed, you won’t even find it on Youtube. Here’s the short version of the story. Vaughan Williams, being overly self-critical, felt he had not found his true voice before he went to Paris to study with Ravel in 1907, so he suppressed much of the music he had written before then. Fortunately, the scores survived and were gifted by his widow to the British Library in the 1950s, but she placed an embargo on their performance until 1990, when she finally granted permission for some of these early works to be performed. The Nocturne and Scherzo only received its first performance in 2001. The KINETIC string quintet never quite found a convincing core sound for this performance. The Nocturne felt tense rather than wondrous. The mood was too often plodding and funereal, rather than a sensuous evocation of the dark colors of night. The phrases were well-shaped but somehow did not flow. The intonation lapses, especially on high notes, were noticeable. The most successful moments were the romantic climaxes where the group found an intense, rich sound while maintaining balance in the thick texture. The Scherzo achieved some moments of delight, as snatches of the English folk song “As I Walked Out” playfully popped in and out of the shimmering texture. But even here, there were issues with the ensemble, a lack of control in the quick tempo that caused spiccato sections to be out of sync. It’s not until the very end, when the folk tune is stated in full, that the quintet finally found a unified voice of wistful remembrance, which was indeed quite lovely.

Composed for violinist Jennifer Koh and her longtime mentor Jamie Laredo, Anna Clyne’s Prince of Clouds (2012), a single movement concerto for two violins and string orchestra, harks back to the Baroque form of the Bach Double Violin Concerto, but paints an entirely new landscape. The words that come to mind range from “spare, cold, sharp, pristine” to “fragmented, edgy, jagged, violent.” The imagery I had throughout was of seeing the violin’s bow as the long silvery blade of a beautiful sword, slicing precisely through the cold still air with deliberate control in one moment, and slashing with great violence the next. Lin and Latta, the soloists, excelled in juxtaposing the contrasting musical materials. Like intertwined strands of a DNA molecule, they matched each other in intensity and purpose (even their outfits matched). The performance at times felt like a choreographed contemporary dance, with matching bow lengths and bow strokes and perfectly executed pizzicatos and snap pizzicatos. It also reminded me of avant-garde film, with abrupt freeze frames that were visually arresting and also effective in communicating the intense, wild mood swings in the music. This was a superb performance.

The three shorter works on the first half of the concert lead us inexorably to the heart of the program, Benjamin Britten’s distinctive masterpiece Serenade for Tenor, Horn, and Strings (1943). Britten is no stranger to KINETIC’s programming. The ensemble is close to completing the performance of the composer’s entire output for string orchestra. What makes the Serenade remarkable is Britten’s ability to paint with such natural sensibility an expansive landscape from wondrous twilight to fearsome night, and perhaps metaphorically from life to death. Through exquisite word painting, Britten transforms the poetic intentions of a compilation of six English texts on the theme of night into music.

Robert Johnson, associate principal horn of the Houston Symphony, set a haunting tone for the song cycle with his evocative opening prologue. The sound of natural harmonics on the horn has a particular tone color, an otherworldly quality that immediately takes us to Britten’s twilit landscape. Tenor Christopher Bozeka, an HGO studio alumnus, entered Cotton’s “Pastoral” scene with a pure, clarion voice, and sensitively added tender playfulness to paint the picture of “a very little, little flock.”

Tennyson’s “Blow, bugle, blow” is quite literally punctuated by horn fanfares resounding across the hills. Johnson and Bozeka echoed each other expressively with a well-paced succession of beautifully shaped phrases that gave this movement a long arc. Both soloists delivered an appropriately darker tone for the setting of Blake’s Elegy “O Rose, thou art Sick” while the string orchestra pulsed incessantly behind them, creating an almost eerie mood. Bozeka was fantastic in the “Lyke-Wake Dirge,” building up an atmosphere of menace and fear within the repetitive construction of the verse through a variety of vocal colors, from muted and ethereal to firm and powerful. This was an intense movement for the string orchestra as well, and they produced a thrilling post-fugue climax, alongside a dramatic entrance by the horn. Bozeka showed off another side of his versatile voice in Jonson’s “Hymn to Diana,” having a bit of light-hearted, nimbly articulated fun while the strings shimmered brightly behind him.

As the last note of Johnson’s horn sounded from off stage, a distant note that lingered long and true before fading into the night, there was total silence in the performance space. The enchantment of night had been invoked by the power of the music and the music-making. I did not want to step out of that captivating landscape.