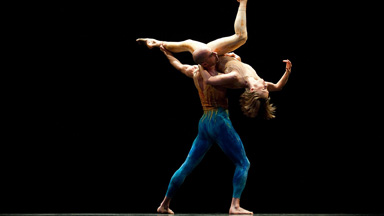 Lar Lubovitch Comes to Pink at the Brown

As founders Jane Weiner and her sister, Susan Rafte, hark from the dance world, dance has always had a strong presence on the program. This year, Society for the Performing Arts (SPA) has outdone itself with the choice to bring in the Lar Lubovitch Dance Company.

Lubovitch, a seminal American choreographer with a distinct voice, is known for his highly lyrical and visually stunning dances. He was one of the first choreographers to use music from such minimalist masters as Phillip Glass and Steve Reich. His works grace the repertory of such major companies as the National Ballet of Canada, Alvin Ailey American Dance Theater, American Ballet Theater, Hubbard Street Dance Chicago, Limon Dance Company, New York City Ballet, Paris Opera Ballet, Royal Danish Ballet and San Francisco Ballet.

Lar Lubovitch brings us into his moving world below.

Dance Source Houston:  I’ve seen your work performed by other companies here in Houston, but I don’t recall ever seeing your company. Is this your first trip to Houston?

Lar Lubovitch: Yes, in 45 years, we have not performed here.

DSH: On behalf of Houston, I apologize for the oversight! How did you end up coming via SPA’s offering to “Pink at the Brown?”

LL: They asked, and we go to where we have been invited. Also, the cause has particular meaning for me. My mother died of breast cancer, and my assistant of many years has been in remission for many years. Breast cancer has been quite present in my life.

DSH: Dance is such a fragile art form, yet you have had such longevity in the field, steadily creating new work since you launched in the late 1960s. What’s your secret?

LL: I’m obsessive compulsive! I need to create. I feel an urgency, fueled by curiosity. I’m always interested in the next step.

DSH: Tell us about Meadow, the work on the “Pink at the Brown” program.

LL: Kate Skarpetowska and Brian McGinnis will be dancing the duet from Meadow, which was originally created for ABT and danced by Julie Kent and Marcelo Gomes. In fact, it’s particularly meaningful to the occasion because I created the work just after my mother died. It’s a subtle evocation to death. There’s a sensation of suspension of life, of a moment, which doesn’t really resolve, but remains in suspense. It’s about mystery.

DSH: It’s super exciting for us to see Kate dancing, because many of us just saw two of her works in The Houston Met’s show last weekend.

LL: I know she has been very involved with The Houston Met. She’s a talented, young choreographer.

DSH: And there’s more Lar on the Houston front. On Wednesday, at the Landmark River Oaks Theatre, we will see a clip of you talking about creating Othello for The Joffrey Ballet, along with a snippet of the ballet, in the film, Joffrey: Mavericks of American Dance.

LL: It’s like a Lar Lubovitch festival in Houston!

DSH: Yes, we are making up for lost time. I was privileged to see a lot of your work when I lived in Washington, DC during the 1980s. You were very much the choreographer of my generation, and a huge inspiration to Jane Weiner, a co-founder of the Pink Ribbons Project. I’ve always marveled at the way you move a group of people across the stage. No one in dance comes close to what you have accomplished in the actual architecture of ensemble movement. How ever do you do that?

LL: I have to say I don’t fully understand it myself. I draw from an intuitive source. I will say I behave like a painter. I went to art school, and studied painting and drawing. I think of the group work as a broad swath of paint, as if I’m painting the space.  It’s like Japanese brush work in a way. There’s a lot going on in single stroke.

DSH: How do you juggle setting works on other companies and working with your own?

LL: I definitely have plans for my work to be performed by other troupes, but I don’t want to be a museum. I place existing pieces on other companies, and create new works for my own.

LL: We are celebrating our 45th anniversary next season, my 50th as a dancer and my 70th birthday.

DSH: Wow, you look terrific. I just saw you in the Joffrey Movie.

LL: I bet I look amazing by telephone.

DSH: Any thoughts about being a choreographer in 2012?

LL: We can’t avoid the reality of the arts in this economy. The arts have suffered tremendously, dance more than the other arts.

DSH: What’s your strategy for survival?

LL: At a visceral level, the intention to survive and a great deal of stubbornness.

LL: The one I’m about to make. It’s perfect in my fantasy.