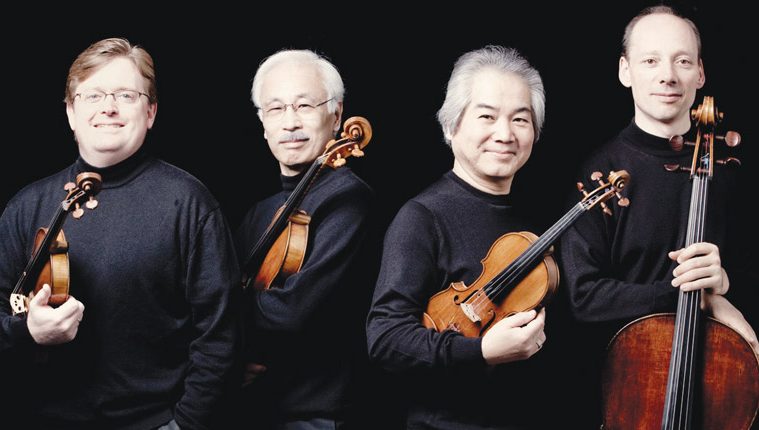 “It’s something like a love affair between the Tokyo String Quartet and the Houston Friends of Chamber Music,” says violinist Kikuei Ikeda. First invited to perform in Houston just seven years after they officially formed at the Julliard School in 1969, the venerable ensemble has returned nearly every season since and have played in the Bayou City more than any other string quartet ever.

It’s hard to imagine the world of classical music without the Tokyo String Quartet, much less Houston. Entering the international stage at a time when musicians from Asia weren’t nearly as prevalent in western classical music as they are today, the Tokyo Quartet were pioneers in their youth. Sadly, the ensemble’s long and storied relationship with Houston Friends of Chamber Music will end at the conclusion of their upcoming performance of Mendelssohn’s String Quartet in E minor, Op.44/2. After 44 years as a professional ensemble, the Tokyo String Quartet has announced that it will retire in June of 2013.

Given that their presence in Houston has spanned the length of their mature career, one can trace the history of the quartet through their concerts in Houston, and there are three performances that stand out for the artists and audiences alike.

When founding violinist Koichiro Harada suddenly left the quartet in 1981, it was just prior to a concert in Houston. After the recital was initially rescheduled, the quartet had not yet begun the process of finding a replacement when they made the decision to perform as a piano quartet with pianist Ruth Laredo.

“It still gives me goose bumps to think about this concert,” says Ikeda. This was a pivotal time in the quartet’s history and, as the musicians came on stage in Hamman Hall, the audience began to applaud and just wouldn’t stop. The grateful crowd continued to applaud long after the ensemble had taken their seats.

Ikeda continued, “I think they were appreciative that we came, but I also think they were saying to us ‘keep it going.’ It was such an emotional way to start a concert. It was a special moment for us.”

After doing a bit of collective soul searching, the quartet made the difficult decision to work with their first non-Japanese member when they invited Canadian violinist Peter Oundjian to join them as their first violinist and, after an extraordinary 14-year tenure with the quartet, his violin career came to a sudden halt with the onset of a repetitive stress injury to his left hand. There was a mini-farewell tour planned and on the short list of concert destinations was Houston. Camera crews were on hand this time as the artists walked on stage in the then new Alice Pratt Brown Hall for what would be the final concert of Oundjian’s career.

Tragically, one of the most memorable concerts in Houston came under unfortunate circumstances. It was on the morning of a performance while on tour in 1993, that violinist Kikuei Ikeda got notice that his mother was gravely ill. After immediately rushing to the airport to find a flight home that day, it was determined that the best he could do was to play the recital that night and take the first plane back to Tokyo the next morning.

“I have no idea how I played that concert. I was in such a state of panic,” says Ikeda. In retrospect, the situation turned out as well as it could have. The concert went on as planned, and Ikeda left early the next day, making it home just in time to spend a few last hours with his mother before her death. “At the time, this concert wasn’t that memorable,” remarked Ikeda, “but looking back, I did the right thing by playing.”

In addition to the Mendelssohn, for their 39th and final program in Houston, the Tokyo String Quartet will offer music by Haydn and Bartok. “This particular program was not meant to be a farewell program,” says Ikeda. It was not planned that the quartet would disband completely when violinist Kikuei Ikeda and founding violist Kazuhide Isomore decided to retire in November of 2011, but shortly after that announcement, violinist Martin Beaver and cellist Clive Greensmith decided that the best way to honor the quartet’s 44 year history was bring it to a graceful close. Beaver notes in a public statement that, “It is a difficult prospect to replace one long-standing quartet member. To replace two of them simultaneously is a Herculean task.”

“Although I love playing string quartets,” Ikeda says, “there are things related to traveling that I can’t do as easily as I used to. I want to make this decision on my own and not have someone make it for me, and I feel very strongly that the time is now.”