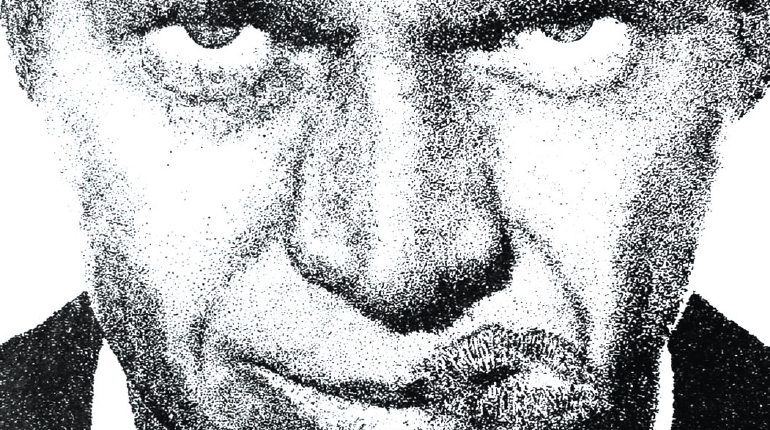 Laura Lark – All the Pretty People

ANY IDEA HOW SEXUAL FAVORS, Pete Seeger and faux gold leaf make their mark on the art world? It may not be what you think.

Laura Lark is a Houston icon. Her piece “The Misses Wang” (1999) is the first artist’s work I remember seeing in the city — in all its 8×10 feet of pink-acrylic paint- and-black-Sharpie-marker-glory, the inspiration of which was taken from a Vera Wang bridesmaid dress advertisement.

And as far as she is concerned, Houston is worth it.

“It’s weird and multicultural and disorganized and grimy and it makes no sense in many ways. I love the area I live in, and my studio is in my back yard. Essentially, though, it’s about the work, and Houston is a good place to get that done relatively inexpensively. And the food kicks some major butt.”

Some readers may also know Lark as a visual arts writer for Glasstire, but these days she is no longer writing about art.

She explains, “Making art is completely at odds with my practice as a writer and, despite the fact that I love to have written in certain ways. I absolutely hate to write.”

She is quick to acknowledge, however, literature as a strong informant for her visual art. As a University of Houston Creative Writing student, she felt akin to the independent yet imprisoned (societal or self-imposed) female characters of Hawthorne’s “The Scarlet Letter,” James’ “Portrait of a Lady” and Wharton’s “House of Mirth.”

Lark has also been crafting a series of interrelated fictional short stories, the subject of which she describes as, “…a fictional family that looks an awful lot like my own. It’s not pretty. It’s ugly and violent and looks nothing like my art.”

Much of her artwork is inspired by her good-intentioned but guilt-ridden, liberal, white, middle-class Chicago-area upbringing, describing her parents as “pre-hippies, the Pete Seeger-type.”

“Since I was inundated by instruction growing up, I think I’m trying to fend off the chaos or the anxiety of the unknown in some way, and so I execute my artwork in an organized, systematic manner. Also, as women (and sometimes men nowadays), we are directed with a list of instructions: recipes, sewing patterns, ‘how-to’ guides for clothing, cosmetics, and hair. While waiting in the nail salon one day, I saw a magazine article in Cosmo with a step-by-step guide to giving a hand job.”

Not much left to the imagination there. So, what’s a Midwest girl to do?

Lark sources exclusively from fashion photography. Most often she is responding to images in magazines that she recognizes as transcending fashion and representing a certain era, images of how she wanted to look (maybe how she wanted to be seen) as a kid growing up in the 1980s — illustrating romantic notions about her own icon, such as Francoise Hardy, Michelle Phillips and Mary Tyler Moore.

“I see my work as a kind of paradoxical feminism that embraces a rejected cult of beauty,” Lark says.

“I’m not interested in real people; I’m interested in how fashion images work on real people. Trends come and go, but a woman in a hideously-hued taffeta bridesmaid dress seems to be pretty timeless. Pretty ridiculous.”

In Lark’s experience, two assumptions are usually made about her work: one, that her large scale, painstakingly hand drawn, detailed images are commercial prints; and two, that the figures she portrays are actually her. She resists the temptation to point out the absurdity of an 11’ printing press. And when, during the exhibition opening for what is assumed to be a “deeply autobiographical” series of works, someone places a hand on her shoulder and says, “I’m sorry you’re so sad,” her dry, witty response tends to be, “Yeah…me too…but not for the reasons you’re thinking.”

She also resists the formal materials inherent to her UH MFA Studio Art training, opting for lightweight, durable, and practical qualities. For example, she uses Tyvek instead of rice paper because her synthetic materials of choice (Sharpie markers, metallic paint markers, faux gold and silver leafing) adhere well to its surface.

“Most importantly, Tyvek, like my subject matter, is completely artificial.”

What isn’t artificial is Lark’s artistic presence in Houston. She has had a relationship with Devin Borden Gallery since the mid 1980s.

She recalls, “I was surprised — delighted — that, often without my knowing, Borden would visit my shows, paying attention to how my work was progressing. Because Devin Borden worked with Hiram Butler, and because there’s not much, if any, figurative art at their space, I never imagined that I would be included among their artists.”

Of equal surprise and delight for Lark was that Devin and Hiram Butler eventually brought her on board. Her current exhibition at the Devin Borden Gallery, “The Liveable Forest,” is a continuation of that relationship. The show includes many of Lark’s usual themes, however this time there are images of men, including the infamous Steve McQueen. Aspects of the exhibition also point to Lark’s thoughts about the incompatibility between nature and society, with installation elements that represent “leaves,” “hills,” snow” and so on.

“…as if nature were made by a person who really doesn’t want to go outside,” she says.

After all, who wants to risk dirtying their taffeta?

— NANCY ZASTUDIL
Nancy Zastudil is an itinerant curator who entrusts her art collection to an anonymous Houston resident.