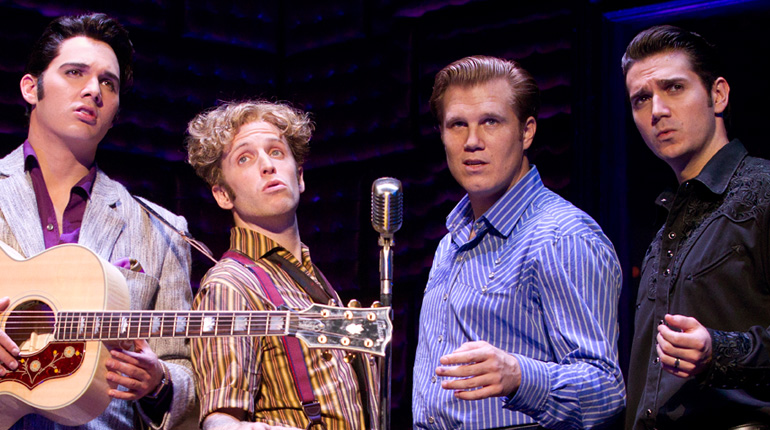 Chris Grant grew up in Denton, sick where, in the third grade, he made his stage debut playing the American flag in “The Fifty Nifty American States.” After studying theater in Chicago, Yale, and Oxford, he made his Broadway debut understudying the role of Johnny Cash in the Broadway hit “Million Dollar Quartet.”

The show recreates a night in which four now-legendary musicians held an impromptu jam session at the recording studio owned by Sam Phillips, considered the father of rock ‘n’ roll. Along with Cash, they are Elvis Presley, Carl Perkins and Jerry Lee Lewis. In the tour of “Million Dollar Quartet” that opens at Dallas Summer Musicals this month, Grant plays the non-singing role of Phillips. Mark Lowry of TheaterJones chatted with him about the experience and the seminal figure he portrays, who is as important to America’s identity as that role Grand played in third grade.

A+C: The tour of Million Dollar Quartet recently played Memphis, which is where the story takes place. Did performing there feel more special than in other cities?

GRANT: Yes. I don’t want to make anybody else feel bad, but Memphis was crazy. Me and the boys, after the show, would go over to [the] studio where this took place. We would record our own original stuff. We’d sit in there until 2 or 3 in the morning, just soaking it all in. It was wild. It’s a great. They treated us like kings, it was incredible. I expect the same treatment when I come home to Dallas.

A+C: How did you prepare for playing this legendary producer?

GRANT: There’s not lot of footage of Sam. Most of what I picked up on was every word I could possibly read. I pored through biographies. It was daunting. This guy was the father of rock ‘n’ roll, it’s his sound. There would be no [rock] music without Sun Records and Sam Phillips. To put that in perspective it’s a crazy thing to step back and think about.

He was hospitalized twice before the night our play takes place, he was putting in 19 hours a day at Sun Studio. He skipped Christmas with his wife and kids so he could get this record company going. That kind of passion and dedication is something I like to latch onto. He was a father figure to these guys as well as being kind of a buddy. It gives me a lot of levels to play with.

A+C: Did he know what he was doing in creating this new rock sound, or did it happen organically?

GRANT:   I think it’s a little bit of both. He was the only one at the time recording African-American artists, and he took a lot of flack in Memphis for doing so. As a kid he went through Memphis and New Orleans and heard this sound that stayed with him for all these years. You could never recreate it until the right moment came along. It was hillbilly and gospel and blues music, and what we now know as rock ‘n’ roll, but at the time at was just this idea in his head that he couldn’t get rid of. People could blame him for whatever they want, like not being able to manage talent very well. He kept trying to turn Roy Orbison into a rockabilly star, he was just so focused on putting that sound in his head on tape. It succeeded in some places and didn’t in others. It was mixture of organic happenstance, and this need to put that sound out there.

A+C: Is it hard to keep the impromptu feeling when you’ve rehearsed and performed the show so often?

GRANT:   I started out with the Broadway company in 2010. I covered Johnny Cash. The producers and directors have been amazing about putting together this group of people. Most of the guys are musicians, and so jam session isn’t hard for them to pull off, it’s what they do in everyday life. But we also really have a good time with each other, and that makes it instantly easy on stage to keep it loose and alive.

Chuck Mead, our music director, was with [country rockabilly group] BR5-49. He made sure and still makes sure that we keep that loose, raw feeling. We don’t have too much instrumentalization. You can’t do an overly polished sound with that.

A+C: Why were musicians drawn to working with Phillips?

GRANT:   There’s a lot of stories about Sam not having clocks in the studio. It was a two-person studio. That comfortability that he allowed his artists to have; he talked to them like sons and friends, instead of these big corporate machines where you’d have to clock these two songs in two hours to record or whatever. He would let them organically find their sound. He basically just let the boys play. They could come in and drink whiskey with him.

A+C: When you went on for the role of Johnny Cash on Broadway, how’d you prepare for performing with that signature deep voice?

GRANT:   I used to joke that when I was going on for Johnny Cash, I’d have to drink whisky and smoke a pack of cigarettes just to hit those notes.