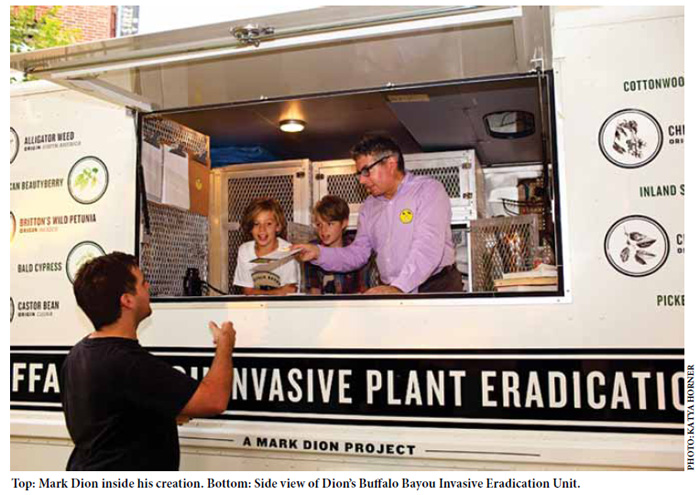 Food trucks have become ubiquitous in Houston, salve commonly seen stationed in parking lots and street corners. However, search one truck that Houstonians might see in the coming months is not like the others. Instead of typical eats such as tacos and wraps, artist Mark Dion’s modified panel truck presents an unusual menu.

The vehicle displays a list of items that include Alligator Weed, Inland Sea Oats and Elephant Ear. Though perhaps easy to mistake for exotic foods offered at popular Houston eateries such as Feast or Moon Tower Inn, accompanying drawings on Dion’s truck of the aforementioned native and invasive plant species, a logo depicting a skull and shovel-and-pickaxe “crossbones,” and a title that reads “Buffalo Bayou Invasive Plant Eradication Unit” suggests an entirely different venture.

Houston is known as the Bayou City for a reason. It was founded on the banks of Buffalo Bayou, which extends 52 miles from Katy all the way to the Port of Houston, and more than 40 smaller bayous and creeks snake through its terrain. Nevertheless, it seems that most of the city’s residents (prior to writing this piece for A+C, I was counted among them) remain uninformed about what an important role Buffalo Bayou has played in shaping the social, economic, and geographic — not to mention the culinary — history of this region.

Dion’s Buffalo Bayou project specifically addresses the problems that invasive plants pose for the natural ecosystem. “Since the early 1990s, I have done a fair amount of work discussing the issues of alien species and their effect on biodiversity. I have been attempting to tease out the complex social and environmental dimensions of invasive species politics and theory. When touring the Houston waterways or spending time in South Florida or on the Upper Delaware near my home, I can see the problem of invasive plants and their contribution to habitat degradation is a serious issue.”

For his “Confluence” commission, Dion wanted to create “not merely a discursive work addressing the knotty problems, but a work that was also activated and being used while investigating these issues.”

With the October 12, 2011 launch of the BBIPEU, the newest weapon in the battle against invasive plants was deployed. Dion’s mobile response unit serves multiple purposes. Equipped with hoes, rakes, and shovels, it is a functional work truck with the capacity to rid Buffalo Bayou and its tributaries of the unwanted plants that are choking the waterway.

Furnished with a steel table and cabinets that store microscopes, petri dishes, beakers, and dissection kits, it is a scientific laboratory on wheels. Stocked with insect nets, plant presses, specimen bottles of various sizes and pinning boxes, it is a traveling herbarium.

The BBIPEU, like most of Dion’s other works, betrays an acute interest in environmentalism and nature, and is deeply engaged with science. Performing the roles of scientist and explorer in addition to that of an artist, Dion’s artistic practice incorporates and appropriates aspects of ecology, archaeology, biology, ethnography and history, and often focuses on the taxonomic principles of ordering, collecting, and exhibiting — practices that are significant to the art world as well.

Designed as an outreach tool in Buffalo Bayou Partnership’s efforts to inform the community about its greatest natural resource, at the core of the BBIPEU project is its educational mission. A variety of field guides, local maps, and history books can be found in Dion’s roaming library, which will visit schools and will be used as a site for demonstrations, workshops, and volunteer training.

Like much social activist art, it can be difficult to locate the BBIPEU project in the context of art and aesthetic concerns. In response to this, Dion says: “I view this as part of a long tradition of American landscape art, which we can trace back from the Hudson River School of painters and Frederick Law Olmsted; through romantic symbolists like Albert Pinkham Ryder; painters of place like Milton Avery and Georgia O’Keeffe; photographers like Eliot Porter and Robert Adams; and right through to the earth art tradition represented by Mierle Ukeles, the Harrisons and Mel Chin. This work is how an artist today makes a consideration of landscape.”

Furthermore, the success of the BBIPEU is dependent on a participatory audience. “This means not producing merely something that one stands back and looks at, but rather a work that takes an active part in constructing the landscape one desires. This can be complex since the work requires fidelity to rigorous formal and discursive strategies, as any artwork must, yet it is also something to be used, to be completed. As has been said in the past, ‘the viewer completes the artwork;’ in this case it is very much the user who completes the artwork.”

Collaboration and community involvement is integral to the BBIPEU project.

Much like Buffalo Bayou itself, the “Buffalo Bayou Invasive Plant Eradication Unit” is anything but static. On the contrary, it is a vehicle for change.