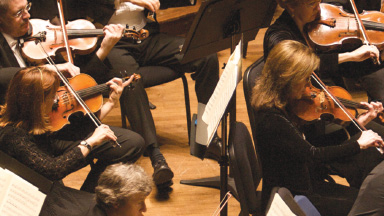 Life Outside the Meyerson

Sundays can get hectic for many musicians of the Dallas Symphony Orchestra. Not only do they often play a matinee concert here at the Meyerson, click but many also fill the hours before and after in church choirs, illness coaching sessions with students and practices and performances with other musical ensembles.

DSO cellist Theodore Harvey, for instance, sings in the choir of Dallas’ Church of the Incarnation. “It can make for a very full Sunday when I sing two services and play a symphony matinee,” Harvey says. “But I enjoy it. It’s busy but it’s a good kind of busy.”

DSO violinist Maria Schleuning is artistic director of the contemporary music ensemble Voices of Change. Its concerts are usually presented on Sunday evenings at Southern Methodist University’s Caruth Auditorium. “It makes for a long day because we start with a dress rehearsal in the morning,” Schleuning says. “But it’s fun. We do it because we enjoy it.”

Though they focus intensely on music making with the DSO, most of the orchestra’s musicians also maintain busy musical activities away from the Meyerson. They are university professors and private music teachers; chamber music players, conductors, fiddlers and jazz musicians. They compose music and record commercial jingles; they play church gigs and free concerts at museums and in school classrooms.

Because the DSO attracts the highest quality musicians, the depth and quality of each of ensembles in which they play rises accordingly. The contribution of DSO musicians to the cultural life of North Texas is invaluable.

In rehearsal studios they inspire young students, foster new audiences and train young professionals. In concert halls they promote vital new music, sustain classical music’s traditions, and perform with unmatched polish and professionalism. Their performances entertain and inspire. Dallas could not claim its status as a world-class city without their contributions. Several musicians in the DSO serve on the faculty at Southern Methodist University. Most teach private lessons. Several work as mentors and teachers to Latino and African-American students participating in the DSO’s Young Strings program. They provide musical coaching to the different instrumental sections of the Greater Dallas Youth Orchestra’s training ensembles.

Violinist Arkady Fomin is professor and artist-in-residence at University of Texas at Dallas and is founder, artistic director and conductor of New Conservatory of Dallas, which also provides musical training to children and precollege age string players. (The conservatory will present its annual Symphony of Toys on Sunday, November 27 at the Meyerson, in support of WFAA-TV’s Santa’s Helpers Toy Drive.)

Players from the DSO frequently play chamber music recitals with their own established groups and with “pick-up” ensembles. Fomin is violinist in the Clavier Trio, which plays regularly at University of Texas at Dallas and at Carnegie Hall. DSO players often anchor ensembles featured on the Fine Arts Chamber Players’ free Bancroft Family Concerts at the Dallas Museum of Art: The Dallas Symphony Brass Quintet opened the series last month; cellist Nan Zhang will perform with a trio on November 19; Principal Second Violinist Angela Fuller is featured on February 25; and violinist Schleuning joins DSO Associate Principal Cellist Jolyon Pegis in a piano trio on April 28.

Last summer Associate Principal Cellist Yuri Anshelevich and Senior Principal Associate Concertmaster Gary Levinson were starred on separate concerts during the free Basically Beethoven Festival at Fair Park. Principal Clarinetist Gregory Raden was featured at the Mimir Chamber Music Festival in Fort Worth. The list goes on and on.

Schleuning was named artistic director of Voices of Change in 2009 and has been the group’s violinist since 1996. The septet founded in 1974 has always maintained close ties to the DSO and to SMU; it currently also features DSO players Barbara Sudweeks, viola; Kari Nostbakken, cello; and Paul Garner, clarinet. They will present four concerts this season, plus introductory salons and casual programs. Schleuning believes every extra chamber music concert played by the musicians of the DSO ultimately reflects positively back on the orchestra.

“It is a more intimate setting, so it is a little more accessible as far as meeting the musicians,” Schleuning says. “You can talk to them, be up close to them, be in the audience with them. Then I think it gives us a greater opportunity to get to know our Dallas Symphony audiences.”

For Harvey, singing in the choir at Church of the Incarnation gives him different insights into playing the cello. “The good thing about singing is you have to be very intensely aware of phrasing and line because it is directly connected to breathing,” he explains. “That’s a way of thinking about music that can also be helpful for instrumentalists. It’s been a great experience for me. It’s a whole different kind of music, a different way of making music and a lot of composers that I wouldn’t have heard of otherwise.”

Ultimately, the hard work and extra efforts by DSO musicians benefit much of the music-making in Dallas and elevate the city’s cultural cachet. Students benefit from years of professional experience at the highest level; listeners get impeccable and impassioned performances of music in a wide variety of musical styles, in venues around the city.

“Music is our passion; it is more than just a job,” Schleuning says. “We do it because we love it and we want to explore more of it.” Even if it means they can’t always relax and enjoy football and family time on Sundays.