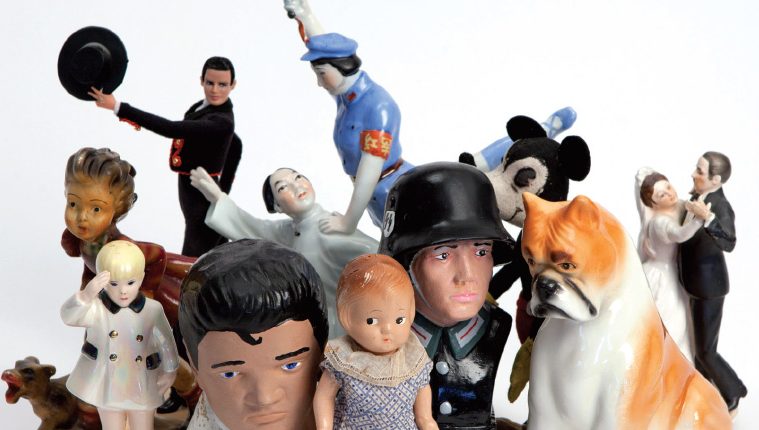 Liliana Porter is a gatekeeper of emo­tional capacity, whose artwork is heav­ily informed by the psychological per­ception of objects in the physical world

— which is to say that it relies on our understanding of her work primarily through our senses (for reference, con­sider how we understand depth percep­tion). She is able to harness the power of the relationship between imagination and composition, activating inanimate objects through considered placement. But not in the conventional, representa­tional ways you might assume.

Though Porter is proficient in multiple techniques, including printmaking, works on canvas, photography, video, installations and public art, she main­tains the use of a cast of colorful main characters — a myriad of metal, plastic, ceramic, glass, and porcelain objects and figurines.

Picture the attic or basement storage box filled with Christmas decorations, old toys, a salt or pepper shaker with no match, a doll head, feathers, dollhouse furniture, playing cards, collectible figurines, miniature plastic animals, a broach, bits of paper and string, com­pact mirrors, hair combs and souvenirs, plus other odds and ends squirreled away over time.

Next, think of the flea market: similar contents now displayed, shelf after shelf, ready and waiting to embark on their next lifetime. Now, think of the adult life-lesson stories constructed from such child-like theatrical elements: Pi­nocchio, The Nutcracker, and Alice and Wonderland as she grows big and small, almost drowning in her own tears.

This is Porter’s world, complete with rec­ognizable figures like Jesus and Mickey Mouse, plus other general and familiar characters like Drumming Bear, Crying Duck, Mr. Snowman, Choir Singer, Pink Farmboy.

Porter is gracious enough to let us have a look around.

Her body of work includes numerous object-drawings on paper (literally, small objects placed on a piece of paper. For example, a collage of a simple line-drawn bunny whose face is partially dis­guised by a tiny, colorful clown mask), photographs of objects in relation to one another (for example, a miniature poodle figurine with painted eyebrows raised, looking at herself in the mirror), or videos (perhaps of the never-ending exhaustion of a wind up monkey toy, with the exception of those who are winding and watching).

“I am an optimist,” she says. “My works are reflections of experiences or maybe desires. For instance, the possibility of dialogue among dissimilar things, com­munication among diverse temporali­ties, opposite origins and languages.”

Porter’s self-proclaimed optimism ex­plains and informs the humor so evi­dent in her work. As a result, we are left to point and laugh as we recognize, and ultimately accept, our shared sitcom of human errors.

For “Fragment of the Cast,” her exhibi­tion at Sicardi Gallery, she presents a series of recent color photographs and a wall installation.

She explains, “I called the series of ob­jects and figurines that I use as subjects in my recent work ‘The Cast’ in order to create ‘situational portraits.’ This is the work that gave the title to the exhibi­tion.”

Included among this cast of characters is at least one pink paint-covered figu­rine, the idea for which Porter attributes to “…a situation out of control; the con­tainer overflowing liquid that is many times the capacity of itself.”

As we see, this is not child’s play. Only as adults do we perceive the irony, humor, and awkwardness in Porter’s scenarios. After decades of personal and shared ex­periences, we can imagine the implica­tions of an armed toy soldier, a figurine with broom in hand attempting to sweep up a mess 10,000 times larger than him­self, or a small candle angel continuing to sing while a flame burns atop her deli­cate and quickly melting head.

Creating these curious dioramas must at times make it difficult for Porter to perceive her “real life” situations at face value, without re-arranging the charac­ters and objects in her mind, if not her sketchbook. I asked if she ever finds her­self perceiving real-life social situations in vignette form. Her answer?