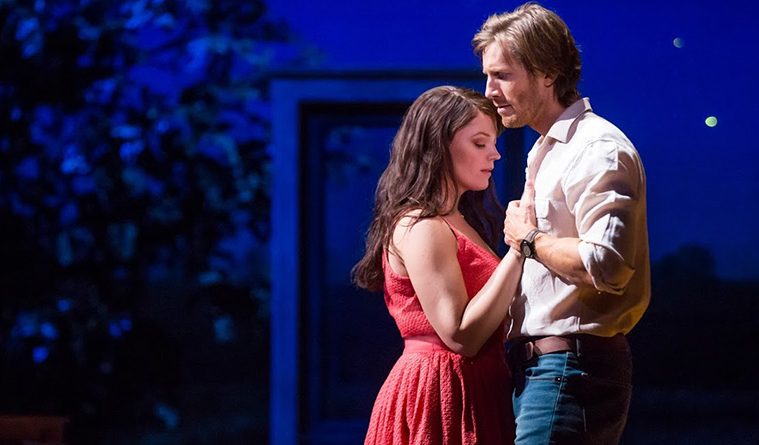 Love and Loss: The Bridges of Madison County at TUTS

Elizabeth Stanley (Francesca) and Andrew Samonsky (Robert) in the national tour of THE BRIDGES OF MADISON COUNTY.
Photos by Matthew Murphy. 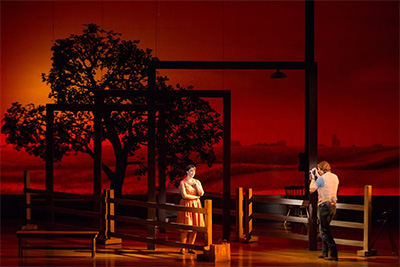 I might very well be the last American woman over the age of 25 who has neither seen the Meryl Streep, Clint Eastwood movie The Bridges of Madison County nor read the 90s zeitgeist novel by Robert James Waller that it’s based on. Or maybe it just felt that way listening to the audience around me, as I took my seat at the Hobby Center for the Theatre Under the Stars offering of the traveling Broadway Musical of the movie of the book (running through Jan. 31) .

Usually going to see a musical based on a famous film–an experience that happens at many a new musical these days–means we’ll spend much of the show comparing the original story in the original medium to the stage version. This once, I found myself instead wondering could this simple story support a big Broadway musical for an audience member with no nostalgia for, and little knowledge of, the original version. Within only a few songs, I found this production of the Bridges of Madison County, elegantly directed by Bartlett Sher, does stand and sing quite lovely on its own with one rather frustrating caveat, accented singing. 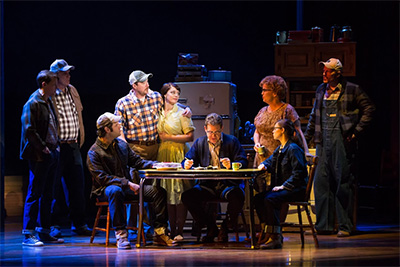 Going in I did already know the basic plot of Bridges, a simple story of a 1960s Iowa farmwife who has a three day affair with a traveling National Geographic photographer on assignment to take photos of local bridges. The characters subverts several tropes and cliches. She’s the exotic one, as housewife Frannie was once Francesca, an artist from Naples who comes to America as a post-World War II bride with her GI Bud but only after her Italian fiancé never returns to her. Meanwhile, the ever-traveling Robert has used his camera to keep himself “outside the moment” and distanced between himself the rest of the world. He’s not a housewife-in-every-port kind of guy and becomes forever changed by this love at first three-days-of-sight. When he asks her to go away with him, Francesca is the one who must make the painful choice between true romantic love and deep familial love. 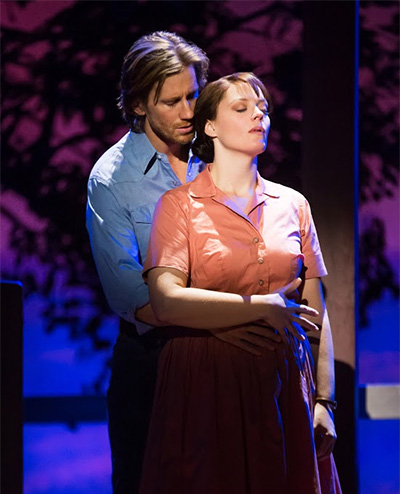 I went in with a cynical mindset, but the show’s adaptation of that simple story not only won me over, but even embarrassingly caused me to tear up a little by the denouement.

The music by Jason Robert Brown, book by Marsha Norma and overall performances by the cast earned my suspension of cynicism. While Andrew Samonsky seems a bit too young and hunky to play the been-around-the-world-weary Robert, he manages to pull off this middle-aged surprise at discovering love in the kitchen of an Iowa farmhouse, by strength of voice and performance. Cullen R. Titmas’s Bud generates a decency to the rather dull husband character. While we’re hoping Francesca will run away with Robert, there’s still sympathy enough for Bud.

Mary Callanan and David Hess are also a treat as the Johnson’s nosey but caring neighbors, Marge and Charlie. Both get scenes and songs that show the possibility of comfortable romance on the other side of the fence.

The heart of the production lies with Elizabeth Stanley as Francesca, but that heart beats with a rather pronounced murmur. With her performance, Stanley gives Francesca agency and strength. The problem comes with that Italian accent, which is fine when she’s speaking, but utterly frustrating to this listener whenever she sang. Stanley has a beautiful voice, yet by holding fast to the accent while singing, some important character choices and general plot points were lost because the lyrics were indecipherable. Every note from Stanley is gorgeous, while every other word is garbled. Particularly perplexing are songs like “To Build a Home” and “Almost Real” where Francesca is supposed to reveal her layers of backstory but instead her past remains a foggy mystery within Stanley’s version of a singing Italian accent. 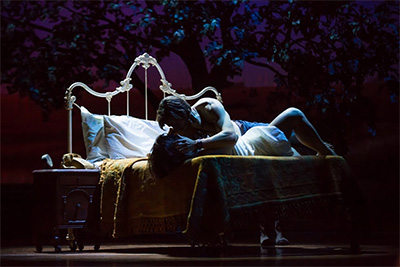 The overall quality of the production outweigh the problematic pronunciations. Even the seemingly simple scenic (Michael Yeargan) and lighting (Donald Holder) designs add thematically depth to the rest of the show. The flat, stark Iowa landscapes that has psychologically stripped down Francesca’s aspirations becomes dynamic and rich with color when she shares a sunset with Robert on a bridge of Madison County. I don’t know that I’ve ever attended a musical so devoted to embodying the wistfulness of love and loss in everything from music, words, set and performances. I just wish I could have caught a few more of those lyrics.