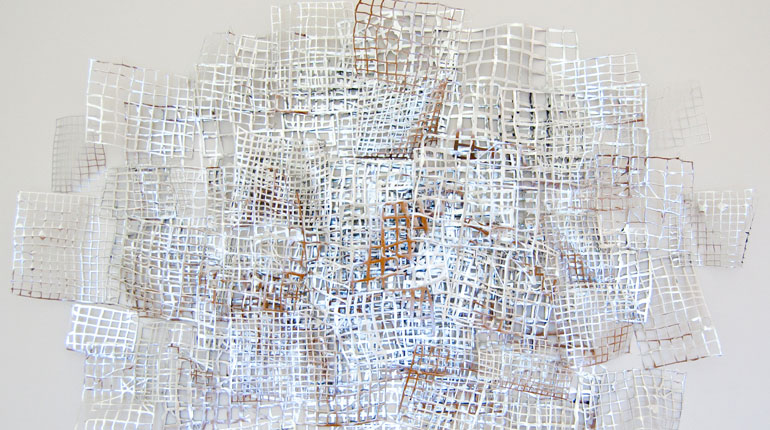 Mark Fox: If That Then This

Grids are nearly synonymous with the concept of order.  Spreadsheets compartmentalize data into cells of information.  Graph paper structures the organization of schemas and equations.  Even if one does not deal in occupations that demand such regimentation, the grid is unavoidable for any urban dweller, as nearly all city streets are based upon this configuration of space.  However, when living in a place like Houston, haphazardly planned and in a constant state of flux between mind-numbing traffic and road construction, we denizens know that a grid can belie the madness of actually navigating a city.

Grids seem to underpin New York-based artist Mark Fox’s latest show at Hiram Butler Gallery, If That Then This. Here, Fox is preoccupied with city planning and its effects on the urban condition.

Although the showpiece of this exhibition was surely intended to be the massive stainless steel panels in Triptych, I found the thematic and aesthetic heart of the show to be Hymn for Jane Jacobs, a drippy and fragile smattering of grids extending out from the north wall. To create this piece, Fox drew grids with his non-dominant hand, cut out the uneven and patchy results, and then coated each one with aluminum. As installed, each grid is mounted on slender pins and densely layered atop one another in the center — more sparsely so at the edges.

The title directly references urban planner Jane Jacobs, who began her career in her own neighborhood of Greenwich Village protesting an elevated highway set to cut through the area.  Jacobs went on to write the influential book The Death and Life of Great American Cities, which championed no zoning and advocated for human interaction as a means to encourage vibrant and economically stable urban communities.

In Fox’s ode, he envisages what happens when the many iterations of—and intentions for—a city plan begin to pile atop each other and play out in actual space.  It’s an unwieldy yet elegant work, though whether Fox sees this method as viable urban planning remains unclear.  Then again, perhaps Hymn for Jane Jacobs is simply suggestive of how cities grow upwards in the central districts, and radiate outwards as they enlarge in circumference.  As evidenced in many American cities, it would appear that this is an organic way for a city to grow, though of course “sprawl” has become the buzzword of choice to denote the current burden of ad hoc development.

As opposed to sprawl, Jacobs herself favored growth in the form of density as a key factor in sustainable urban development. Indeed, many of Fox’s works in the exhibition play with compactness, from lithographs like Below where the city space is compressed together to the point of abstraction, to This Too where the grid has become a globe independent of the shapes and hints of words around it. By relegating the grid to an insular sphere, Fox privileges his personal perception and navigation, and in turn, honors each individual’s experience of a city.  We all form our own paths within the chaos of our home metropolis, colliding and colluding as we go.

–KELLY MONTANA
Kelly Montana is an art historian and critic living in Houston.

Mark Fox: If That Then This
Hiram Butler Gallery
April 6-May 25