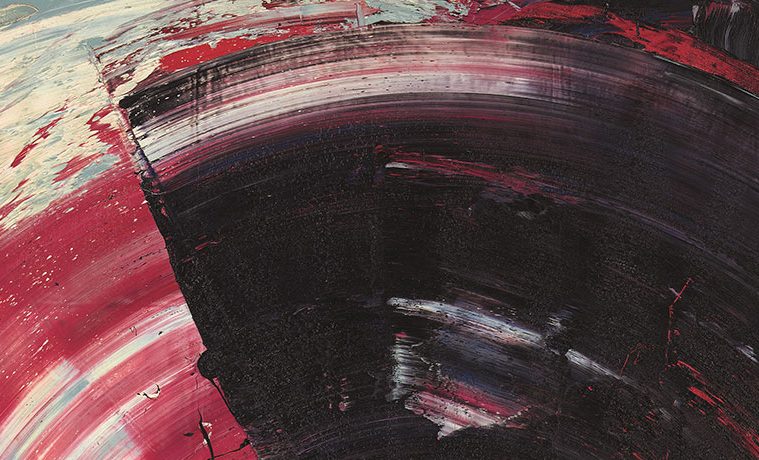 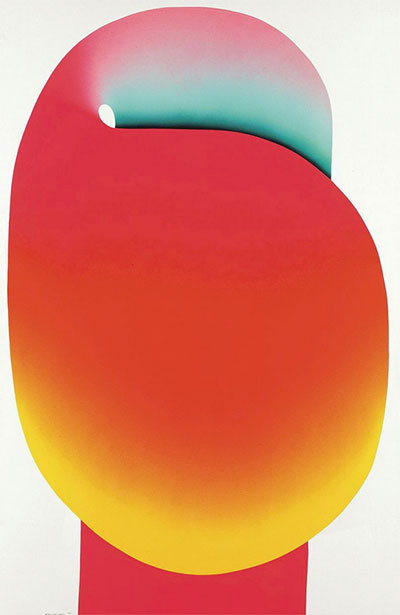 The Dallas Museum of Art has opened a tactile, eye-catching exhibition of Japanese post-war art titled Between Action and the Unknown: The Art of Kazuo Shiraga and Sadamasa Motonaga, on view through July 19. Organized in partnership with the Japan Foundation in Tokyo, the show traces the artistic output of two very different artists who were associated with the Japanese avant-garde collective known as Gutai, through which they crossed paths. Gutai is the combination of the word for “what something is made up of, or the details—gu” and the word for “body—tai,” that come together as “embodiment.”

In the Gutai movement, Shiraga, Motonaga, and a number of other artists found guidance through Jiro Yoshihara, the charismatic founder of the movement. Yoshihara brought progressive ideas from Western art to a Japanese art scene that was too traditional for his taste. His ideas about experimentation, non-traditional materials, and the use of chance and automatism, resulted in a fascinating laboratory whose output presaged everything from Performance Art and Happenings, to Installation Art, even Process art, Conceptual Art, and Electronic Media Art. Where Dada had Hugo Ball and Surrealism had André Breton, the Gutai had Yoshihara whose Gutai Manifesto proclaimed, “In Gutai Art, the human spirit and matter shake hands with each other while keeping their distance” and “Gutai aspires to present exhibitions filled with vibrant spirit, exhibitions in which an intense cry accompanies the discovery of the new life of matter.” 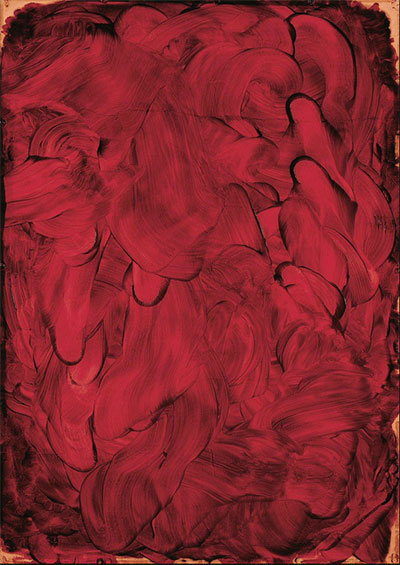 In this exhibition Shiraga’s work can easily be read through the notions of action and matter, while Motonaga’s pieces more obviously explore spirit and the unknown. These paired conceptions are reflected in the exhibitions’ title and in Yoshihara’s manifesto. The show opens with a small selection of early paintings and works on paper by each of the artists, and then flows into a large gallery teeming with art created during the Gutai period.  From the first Gutai Art Exhibition (1955), a large-scale documentary photograph and video of Shiraga’s performance piece, Challenging Mud, set the stage for the radical and progressive art in the exhibition. In this early work, Shiraga wrestles on the ground in, and against, a mass of mud made of cement, plaster, and gravel. A type of painting performance using the body without paint, canvas, or brush, it placed the individual in a direct confrontation with primal matter as an expression of self affirmation meant to exorcise the painful events of the first half of the 20th century for Japan. This performance helps clarify Shiraga’s large-scale abstract paintings in oil done with his feet while suspended above the canvas.

A wonderful example occupies an opposing wall from the documentary photograph. Work I (1958) is a whirlwind of expressive force in black, red, and yellow; an action painting like those described by Harold Rosenberg when he wrote about the New York School years earlier. The difference lies in the conceptual realization and in the content informed by Shiraga’s intent to engage with history and personal struggle. Through Gutai Shiraga found his mature style. The same could certainly be said for Motonaga.

On an adjacent wall two of Motonaga’s pieces, Mr. Tapie (1958) and Kiss (1959), represent his maturation from early pieces that identify an interest in comics and illustration to a signature style that’s much bolder. In these works in oil and resin, one finds an immediate texture and strong rendering of unreal forms that explore his interest in the spiritual and unknown. Motonaga paints in a vertical format, with a strong palette of blue, red, white and black. Large forms that could be called biomorphic, celestial, or even microscopic, writhe and often collide with each other with seething intensity. 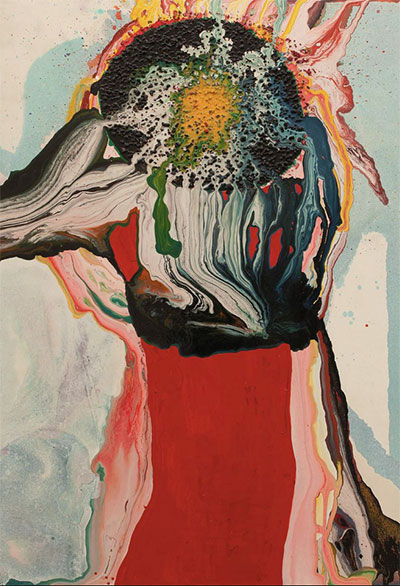 He executes the paintings, like Shiraga, with the supports on the ground, but he uses techniques from Japanese nihonga, traditional painting with attendant materials. The particular form of nihonga practiced by Motonaga is known as tarashikomi, a type of painting that drops or pours succeeding layers of paint, without mixing them, over preceding layers before they dry. This allows the paint to pool, dry, and crack in an unpredictable way that plays with the random element of chance through which he sought to discover forms that are unperceivable, but that compose, and make possible, the beauty in the natural world.

The exhibition follows the artists’ careers toward the end of, and after, Gutai into transitions brought about by a turn toward Buddhism for Shiraga, and a residency in New York, in 1967, for Motonaga. In Shiraga’s case, after a period of dissatisfaction with painting and his ordainment as a monk, he began to incorporate a circular shape corresponding to the Wheel of Life in Buddhist iconography. Ultimately, he returned to his original technique, but with a brighter palette, signifying that perhaps he had found peace.

In New York, Motonaga began to paint with an airbrush and liquitex paints that were quite different from the lesser quality materials he used in Japan. Consequently, the work became brighter, hard-edged, cartoonish, and large-scale with a horizontal thrust that reads like comic books. He continued in this vein for the rest of his career.

This show would have been unthinkable without the interest of collectors, academics, and a handful of recent exhibitions in the U.S. devoted to Gutai. The DMA has launched a tightly focused show that clearly communicates the museum’s intent to expand the field of art and its history in Dallas.