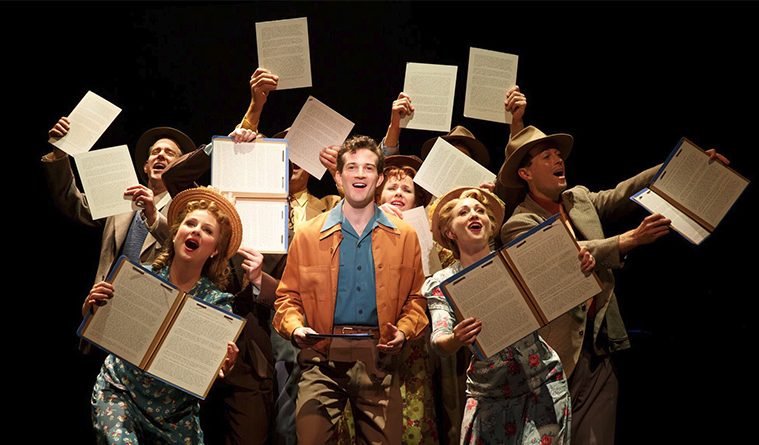 AJ Shiveley and the cast of Bright Star.
Photos by Joan Marcus. 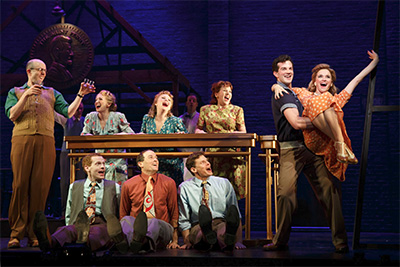 Though it made its Broadway debut in 2016, the bluegrass music-filled Bright Star feels like an old fashioned musical born many decades ago. Now, as Theatre Under the Stars welcomes the show to meander on into the Hobby Center and sing and dance a spell (through March 25 at TUTS and June 12-24 at AT&T Performing Arts Center’s Winspear Opera House), the show calls its audience to settle in and enjoy the pleasures of a new spin on a familiar yarn, just one more time.

Created by Steve Martin (music, book and story) and Edie Brickell (music, lyrics and story) and directed by Broadway veteran Walter Bobbie, the multi-Tony nominated Bright Star makes little pretext that this is a story about storytelling. Without even a line of dialog, Alice Murphy (a radiant Audrey Cardwell and one of the brightest of the stars of the show) gets the plot wheels moving with the number “If You Knew My Story.” Within a few minutes the whole company has jumped in to proclaim the unique universality of their own inner epics. That song’s theme, that storytelling becomes an essential act of individuality that creates community and connection, runs like a train through the length of the show.

Set in relatively the same space, the Blue Ridge Mountains of North Carolina, but in two separate time periods, the 1920s and 40s, Bright Star presents two intertwining, and somewhat reflective love stories. In 1945, a young soldier, Billy Cane (Henry Gottfried), returns from the war set on becoming a writer. His childhood friend, Margo Crawford (Liana Hunt), who manages the small town bookshop, remained his steadfast proof-reader and literary cheerleader while he was away.

Though not-so-secretly in love with Billy, Margo urges him to move to the big (for mid-century North Carolina) city to hone his writerly skills. Both Gottfried and Hunt cook up nice, though somewhat boringly benign, chemistry that works for the gentle tone and time period of the show. Gottfried gives Billy an equal parts nobility and obviousness to guide him through life, though the supposed veteran behaves as if he’s never even seen a slightly racy USO show, never mind the heat of any battle. But this lack of overly dark depths seems in keeping with both Martin and director Bobbie’s vision for many of the characters. 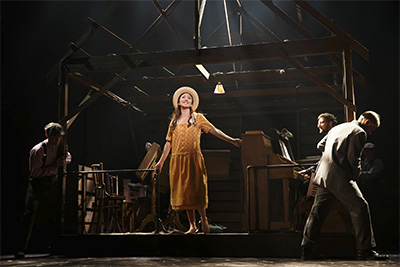 Once Billy makes a call on the prestigious Asheville Southern Journal, we again meet Alice Murphy, the literary journal’s editor and bringer of the real drama. Alice the wordsmith cynic was once the small town romantic in love with the mayor’s son, Jimmy Ray Dobbs (Patrick Cummings). Cummings especially seems to have time traveled into Houston from an old-Hollywood rugged/charming leading man studio stable. Once Billy meets Alice the story dances back and forth in time, creating two separate melodies that eventually weave together metaphorically into one song. (And my literal pick for best one song would be Cardwell and Cummings duet, “I had a Vision,” a kind of “Amazing Grace” antithesis in its sadness and sense of loss.)

The freshness of Bright Star comes from the music and its storytelling techniques, though the two love stories themselves, part fairytale, part Biblical, with a few rather macabre nods to Wilde’s The Importance of Being Ernest thrown in, will likely feel very familiar. In fact, the most shocking thing about the second act big reveal was the gasp from a few audience members who seemed quite shocked by the second act big reveal.

Even Eugene Lee’s scenic design reinforces the show’s philosophy as storytelling as an essential and noble act in itself. All the love tales tangle together on a mostly bare stage with a brick wall backdrop that mimics the backstage of any theater U.S.A.  Meanwhile, throughout the show the ensemble pushes around a large movable, wooden framed structure, which becomes a home/church/gin joint, whatever the players need it to be. That cabin also houses the members of the excellent Bright Star orchestra including banjo, accordion and mandolin players. All together the set and onstage costume changes (lovely period costumes by Jane Greenwood) reenforce the production’s Let’s-Put-On-a-Show nostalgia.

Bright Star didn’t shine very long on Broadway, closing after fewer than 200 performances. But its touring production incarnation seems better suited to the musical’s soul, as a group of players and musicians travel the country, setting up a stage to tell a tale, even if it’s a story you’ve probably heard before in some other version. Bright Star likely won’t shake audiences’ worlds. Yet, on a sweet spring night, it brings music and a bit of magic to the air, reminding us that sometimes the play’s the thing and getting caught up in the melody for a few hours is all that matters.