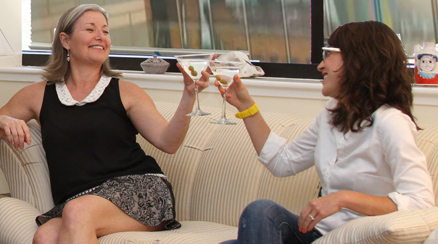 I had planned to hire an animator and have Abby and me worked into the opening sequence, where we fall from the sky with Don, ending up sitting on his lap. But alas, that didn’t happen, so you will have to settle for us gabbing and gulping Martinis.

A + C:  The opening sequence captures the era in every way. I just hang around for what comes after it. What’s your excuse?

Abby Koenig: I adore advertising in general, and I love the 1960s just as much, so the combination of the two grabbed me from the start. It doesn’t hurt that Mad Men is so well written with complex characters and.. Jon Hamm.

A + C: Well why don’t we start right there, with downer Don, my fave mid-century melancholic in mid-life crisis free fall. Don’s running on fumes in these first episodes, fueled by an occasional fix of Vitamin A, as in adultery, with his hi-rise Italian sky neighbor. But really, even the ketchup account isn’t exciting him.

AK: I think that Don has finally come to the realization that he honestly hates life. He was in a miserable marriage, and he cheated to escape, but then he found something good in Megan. There was this invigoration and sense of hope. He gave “happiness” the old college try and it didn’t work out for him. He might as well Scotch it up and hit up the Doc’s wife.

A + C:  I find something poetic in his relentless sullenness. He reminds me of Bobby in Company: the exquisite loneliness of the New York male. Consider his idea for selling Hawaii. It seemed like he was suggesting that it was a great place to commit suicide. Hawaii: Your Death Wish Destination.

AK: And if you recall, he was reading Dante’s Inferno on the beach. Literally, the guy is in hell, a very self-made hell, filled with good looking women and cocktails. I don’t know how I felt about the flashback of Don’s childhood and the brothel he lived at.

AK:  It was almost too Freud-in-your-face. Sometimes I think show’s creator, Matthew Wiener, likes to dust off the text book from the Intro to Psych class he took in college. Maybe the guy just can’t handle love?

A + C: Speaking of love, free love has reared its frisky head in this season. I just loved the Bob & Carol & Ted & Alice moment over dinner with Meghan’s soap buddies. Don’s not into swinging. Who knew? Even Joan gets her free love on, as best she can in that industrial strength girdle. Joan, like Don, seems slightly tired of being alive.

AK: The last season episode, where Don and Joan have a moment in the bar about life and how they never got together, was one of my favorites of last season. I was praying that they would finally have an affair. Joan is an old soul and she’s had a tough time. I do think she and Don are kindred spirits; they can’t keep up with the new world.

A + C: Enough about this clan of fabulously good looking depressives, can we talk about ketchup? Team Peggy or Team Don?

AK: I’m always on Team Peggy. She is the best character on the show. How she got the ketchup opportunity, ehh. I don’t know if I agree with the ethics of it, but if this is a “man’s” world and she needs to be a man about it all, then hell ya, Peggy deserves it.

A + C: Peggy is totally rocking that green eye shadow, too. She’s caught in a world that doesn’t quite know what to do with her. Where’s Sheryl Sandberg leaning in when you need her?

AK: There was this amazing moment in the MLK episode when Peggy is talking with her boyfriend about living in the Upper East Side and he says that he pictured them raising their kids somewhere else, and it was like, BAM, she’s all smiles and demure looks. As successful and as powerful and as rich as she can become, she still just wants a guy to tell her that he “wants to settle down and have kids.” That’s really all she wants. It’s such an amazing character point.

A + C:  And, I bet she lost the apartment because the banking industry didn’t always grant mortgages to women back then. The fashion choices for Peggy are curious, no Mary Quant minis for her.  Hemlines are going up, Nancy Sinatra’s gogo boots are everywhere, there’s a clearer delineation between mod style and old school. Plus, it’s always fun to see dresses that I owned as a middle schooler on TV.  My mom’s china made Episode 4. Any nostalgia for you?

AK: I wanted to be Twiggy.

A + C: Joan is the anti-Twiggy. Her undergarments are a metaphor for Don’s mental state. He’s poised to explode like the streets of the late sixties. But didn’t we see a glimpse of the old Don in Detroit?

AK: Yes, his entire personality lights up at the prospect of a challenge or breaking the mold. He finds delight in reinventing the wheel, which makes sense since he has reinvented himself multiple times over his life.

A + C:  How true: the many faces of Don. How will the season end? If he doesn’t win over Detroit, I see Don falling in the opening sequence for the full hour. You?

AK: I see Don getting caught by the doctor and maybe Megan, and spiraling even further downhill. Maybe the Don/Joan affair we’ve all been hoping/dreading. Something huge has to happen with the merger of SCDP and CGC and the whole Chevy thing, and I don’t think they have given too many obvious clues as to what that will be yet. But I cannot wait!