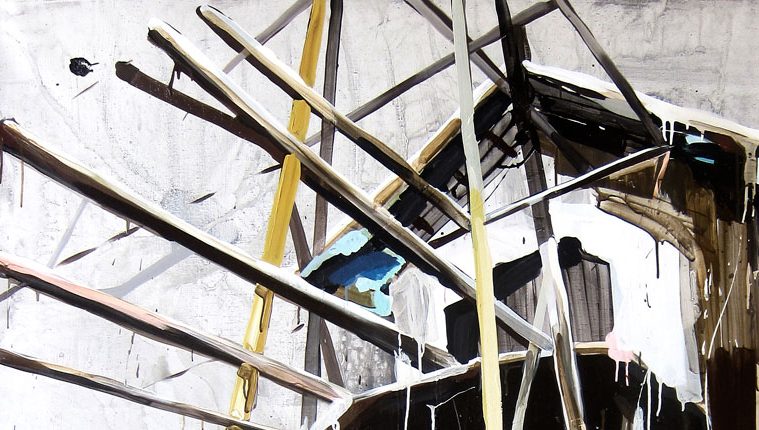 Thin washes and cakey impasto meet to build colossal forms. Shanties and old factories stretch and march through fog. Derelict ships and canoes spot the shore with color. This is the world of Danish artist Mie Olise’s Crystal Bites of Dust at Barbara Davis Gallery.

Olise’s subject matter is the architecture and abandoned boats along Brooklyn, New York’s Gowanus Canal, a run-down industrial waterway that was in its heyday from around World War I through the 1950s. Now just a shadow of what it once was, the neglected buildings stand as rotting testaments to industrialism. The subject matter resonates with Olise’s background; she grew up around shipbuilders and studied architecture.

The dilapidated buildings almost look like creatures from H.G. Wells, appearing to slowly drift along the field of view. Loading House features a stark three-quarters view of an aging building, lifted on scaffolds that jut out into the space above and before structure. The unreal space created by ashy washes of whites, greys and blues forms a delicacy that counters the power of the giant structure.

Indeed the structures have basis in reality, but as the artist paints she develops a relationship with her subject, often embellishing with whimsical features like stilts, struts, or colorful ladders. By lofting the structures on these stilts, the artist literally elevates her subject matter. Other constructions, like the house in No Wholefood House,simply fade away before reaching the lower edge of the picture plane, creating a ghostly figure-ground relationship. For a more personal bond between the work and her subject, the artist infuses some of the polluted water from the Gowanus with her paint.

Throughout the exhibition, Olise plays with the flatness and physicality of the picture plane. Wide fields of paint occasionally drip or cake on the surface of the images, which are further intensified by the paintings’ generous scale. The artist’s choice in juxtaposing paints not only by their hue, but playfully contrasting texture and opacity creates an effect

By playfully juxtaposing paints of contrasting hues, textures and opacities, the artist energizes her gestures and implores the viewer to explore the building as she might have. Yet she leaves enough underlying geometry to convince the viewer of the space within the picture.

Crystal Bites of Dust stands as an encouraging reminder of contemporary painting’s vitality.