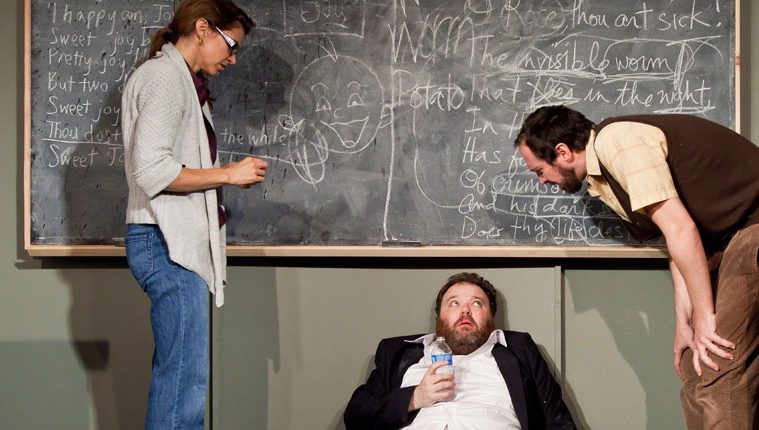 Amy Bruce, Troy Schulze and Kyle Sturdivant in
Mickle Maher’s There Is a Happiness That Morning Is.
PHOTOS: ANTHONY RATHBUN.

If you missed The Catastrophic Theatre’s production of Mickle Maher’s There Is a Happiness That Morning Is, don’t stress, it’s coming back, May 10-27 at their new digs on the docks. Catastrophic has quite an impressive track record with Maher, starting with The Strangerer, followed by Spirits to Enforce. In the fall, Catastrophic will premiere The Pine, a Maher play created especially for Catastrophic, funded from a grant from The MAP Fund.  A + C editor Nancy Wozny chats with artistic director Jason Nodler about the Maher connection.

Arts + Culture: How did you happen on Maher’s work?

Jason Nodler: When my partner, Miki Johnson, was performing in Mr. Marmalade at Stages, we went out one night with her director, the very talented Alex Harvey. After we talked for a few hours he said, “Getting to know you a little, I have a play that you should really read.” That play was The Strangerer and it came in a book with Spirits to Enforce. I knew immediately that I had to produce both of Mickle’s plays and we did produce them back-to-back and to great acclaim.

A + C:  As someone who has seen all of these plays, a few of them twice, I’m a Maher fan-girl. What draws you to his work?

JN: I was immediately struck by how funny Mickle’s work is, how moving it is, how musical the writing. Spirits to Enforce was like a symphony of voices and percussive props and his new work for us, which will have its world premiere this fall at Catastrophic, is all in verse just like our May remount of the sold-out run of There is A Happiness That Morning Is.

Perhaps more than anything, Mickle’s ability to mash up unlike things into a coherent and astonishing whole surprised and excited me as it is unique to any other writer. With the Strangerer, for example, it was Albert Camus’ existential classic, The Stranger,  and the 2004 presidential debate. In it George W. Bush was cast as the existential hero, an impressive thing, pulled off with spirit and grace. With Spirits to Enforce, it was The Tempest, telemarketing, and superheroes.  The Pine counts as its influences Dante’s Inferno, the poetry of Emily Dickinson, and Neil Gaiman’s popular graphic novels such as Sandman. Nobody else of whom I am aware has ever had such success in writing for the theater this way and making it simultaneously moving and hilarious.

A + C:  There is A Happiness That Morning Is was performed in your űber- intimate former office space the first time around. Will there be any changes now that you are in a significantly larger theater?

JN: We were very happy with the original production and we’re bringing it back due to popular demand, not in order to make any significant changes. The intimate nature of the micro-theater productions was very lovely, but each of our productions provides for an intimate audience experience. We’ve almost never performed in spaces that are larger than 100 seats, even with our most popular shows, and we never intend to do that. The new space is a very intimate one. The drawback to the tiny theater we made out of the living room in our old office was that capacity was so limited. Although we ran for eleven sold-out weeks in 2011, we had to turn a lot of people away, and we hate having to do that. We’re bringing it back to remedy that situation and of course too because we love the play.

Troy Schulze and Amy Bruce in Mickle
Maher’s There Is a Happiness That Morning Is.
PHOTOS: ANTHONY RATHBUN.

A + C: Even though you have been performing out of the DiverseWorks space for years, it has to be different to call the space your own now.

JN: It feels great. The nomadic nature of our company during its first five years was less a thing to let go of and more a thing to be rid of; being an itinerant company held no advantages whatever. Being in our own space offers exponential benefits with regard to audience development, efficiency of operations and the quality of the work we put on stage.

A + C: Walk me through the commission process. Were there any limitations? Would you describe the experience as collaborative?

JN: Though it’s not uncommon to do so, we don’t place any limitations on the commission of new work. The play Mickle is writing for us employs a large cast and it is, to the best of my knowledge, his most epic work to date. So it will be expensive to produce, but making new work is always expensive. And I don’t believe one can put a price on the honor of premiering a new work from such a special writer.

The writing process is not collaborative and I wouldn’t want that, but I do read drafts and respond to them. I don’t make any suggestions but I let him know what I think and I ask questions when I have them. The production of the play will be collaborative and, as it is with most new plays, it’s likely that things will change to some degree during rehearsals. I think that the freedom that we gave Mickle to write anything he wanted to write is yielding a very beautiful play and I can’t wait to do my part, along with the cast and crew, in bringing it to Houston audiences.