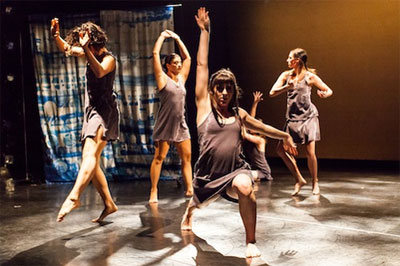 Modern dance has a history of its choreographers being in conversation with visual artists. Two of the more famous examples would be Martha Graham with Isamu Noguchi and Merce Cunningham with Robert Rauschenberg.

Following in that tradition is choreographer Teresa Chapman and visual artist Lucinda Cobley, and both based in Houston. Their cross-disciplinary conversation gave us Shifting Spaces, treat an hour-long program of three dances, presented at The Barn, October 18-19.

The first piece of the evening, Exquisite Corpse, met the audience with two large frames—picture very tall rolling clothes racks—each with two panels of fabric on them. One frame’s panels had a red-on-white pattern, primarily of squares. The second frame’s panels were blue-on-white, squares being the dominant motif. The dancers, all women, entered wearing short dresses of patterned purple-on-purple, presumably a meeting of the two frames’ colors.

Exquisite Corpse movements alternated between slow-and-sustained and quick-and-sharp. The dancers were often in their own individual choreography, becoming a blur of movement, then some—maybe two, maybe the whole company of six—would sync up, giving the eye a pleasant respite from trying to focus on so much going on at once.

Much of the body shaping was angular, a recurring movement was a sort of arabesque with the foot in the air curving into what most every beginning ballet student hears called a “sickle foot.” Of course, in ballet, that curved (as opposed to pointed) foot would be corrected. Here, it was a detail of interest to the observant audience member, perhaps something of a dance inside joke. Of the evening’s program, Exquisite Corpse had the most varied and expansive movement vocabulary.

Throughout the dance, the frames were repositioned about the stage, the fabric billowing out gracefully with each move. The dancers periodically moved through the frames or danced behind them in silhouette, but mostly the frames and their fabric were colorful backdrops to the dance.

With Inflated Duet, Christina Giannelli’s lighting and James McDaniel’s costume design came to the forefront. The costumes were short dresses, the hems expanded and weighted by inflated tubes, bicycle tire inner tubes or something like them. It was as if the dancers were wearing bell mini-skirts. The multi-colored dresses had patterns on them that mimicked Cobley’s paintings, which were displayed in the theater lobby—broad paintbrush strokes swooping across the fabric.

The tone of the piece—light, humorous—was set early when a single dancer entered, stood center stage, facing the audience, and inflated her cheeks as if holding her breath, and the lights changed color, turning the dancer blue. This and subsequent light changes played on the costumes, seemingly altering the costumes’ color and patterns. Another moment of humor arose when we realized this “duet” was inflated to four dancers.

The third and final piece, Sequences, put McDaniel’s costumes decidedly in focus. Similar to the Inflated Duet costumes, these also flared at the bottom and were weighted by thinner, more pliable hoops. Unlike the previous costumes, these were two pieces, midriffs exposed between a spare, sleeveless top and a long, ankle-length skirt. Each costume was white with long, broad streaks of color down the length of the skirts, again mimicking Cobley’s paintings. Each costume had a two-color scheme (yellow/blue, green/pink, red/brown, etc.). They were modern, impractical, and elegant, all at once. 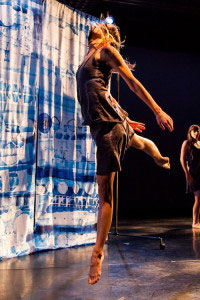 The skirts were made of a fabric with some stretch and bounce to them, so that they twisted, swirled, and recoiled with the dancers’ movements. When a dancer would kneel on the floor, the hoops made perfect circles of white—with those broad stripes of color—around the figure, giving us tranquil moments of stillness. Yes, the costumes were definitely the stars of Sequences.

That isn’t to say the dancing was absent or subpar. Generally speaking, Chapman’s choreography relied heavily on upper torso, gestural movements (with the already noted Exquisite Corpse utilizing more of the whole body—facilitated by that piece’s costumes). With some choreographers and companies, this can lead to flailing arms and muddy composition. Here, Chapman’s movement always felt intentional, precise. That she had gathered some of the best (and busiest!) contemporary dancers in Houston for her creations certainly helped. This was a company highly capable of the crisp dancing we saw.

Shifting Spaces, ultimately, was an evening of dance and color well spent. If the stage settings were more stark than what Graham and Noguchi created over half a century ago, this was none-the-less an exciting collaboration across artistic disciplines. It should serve to encourage more such conversations and creations among Houston artists.