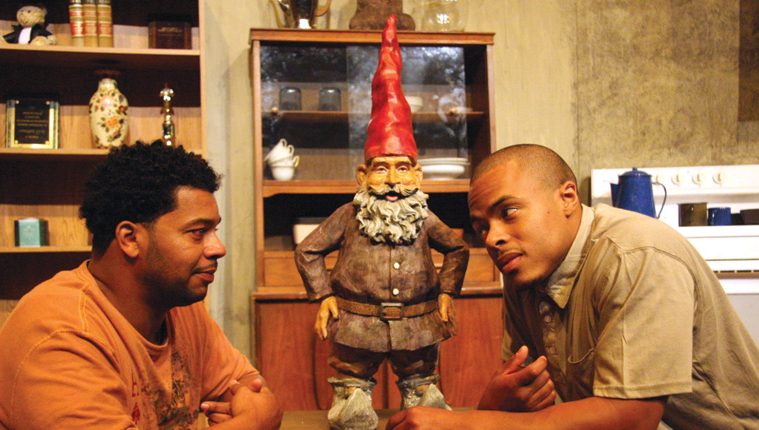 Nathan Louis Jackson is the American classic success story. After years of struggle, he has now established himself as an up-and-coming playwright in the realist tradition of his Pulitzer Prize-winning idol, August Wilson.

Jackson grew up in a working-class neighborhood in Kansas City, Kansas. As a boy, he thought that basketball was his future; but average height put those hoop dreams out of reach. In high school, he decided to pursue theater instead.

His first serious efforts at playwriting began when he got to Kansas State University. After he graduated in 2003, he took a series of dead-end acting jobs in Kansas City. He then returned to Kansas State to study environmental science and maintain the student status he needed to enter his work in college theater competitions.

Fed up with pursuing a degree he didn’t want and working at a restaurant to support himself and his family, Jackson then applied to the prestigious playwriting program at Julliard in 2006 and was accepted. From that moment on, the doors sprang open.

While Jackson was a student, the Lincoln Center commissioned him to write a play, When I Come to Die. And in 2009, it staged Broke-ology, the family drama Jackson had been working on at Julliard. Now theaters across the country are producing Broke-ology, including the Jubilee Theater in Fort Worth where it will be on stage until June 10.

Broke-ology’s success comes as no surprise to Tre Garrett, the Jubilee’s Artistic Director. “The story is just so timely and universal,” he says.  “[It also presents] strong images of African American males loving each other, something we don’t see a lot of in the theater or the media.”

Jackson was busy caring for his newborn second daughter at his home in Kansas City when he spoke to A+C about his playwriting projects and what he sees as the current state of American theater.

A+C: So tell me about Broke-ology.

Nathan Louis Jackson: It’s about family trying to stay together despite their financial issues and the fact that they each have their separate dreams. There’s a father, two sons and the mother has passed away, but her spirit is still present in the house.

A+C: How would you say your play draws upon your early experiences growing up in Kansas City?

Nathan Louis Jackson:Well, some of the struggles that we had are in there. [For us,] if something happened, we would end up laughing to keep from crying. When my father got sick, I didn’t want to think about all that all day long. So we would joke about it to a certain extent, but then after that, we had to move on.

There are these moments in a play. And there are these attitudes. When I was working at the restaurant, the attitude I had was every day, I wanted to quit. I was like, I want to be writing instead of working at the restaurant. And character talks about how he wants to quit then realizes that it’s all in his imagination because he couldn’t quit. So he was kind of stuck. And I experienced that myself.

A+C:  So the play is partly and exploration of personal powerlessness in the face of larger life issues.

Nathan Louis Jackson:Yes. We all at times feel powerless. And money is not the only solution to feel power. This even though we think that if we get a little more money in our pockets, then we’ll feel better. And that’s not always the case. I’m not saying that I’m one of those who believes that money can buy you happiness. [B]ut I do think that just because you don’t have money, then you’re bound to be unhappy. There’s a way that you can get around that. Family is one way. And a top-notch support system, which I learned about early on.

A+C:  What does the title of your play mean?

Nathan Louis Jackson:There’s something about not getting everything you want that makes you a stronger and better person. And there were things that I learned through struggle that I wouldn’t have learned otherwise. So that’s basically broke-ology. It’s the science of not just being broke, it’s the science of making it and striving and being successful and being a happy person despite the fact that you may struggle. And it’s all about looking forward. If I’m happy with what I have and I can deal with things. But next year, I’ll have a little bit more.

A+C: What does playwriting offer you that other genres can’t or don’t?

Nathan Louis Jackson:It’s a slice of life in the theater [and a way to tell stories] to [another] party that you’re connecting to. It’s a live, two-way communication thing, and you don’t necessarily get that with the other forms. [Playwriting is also about] bringing things to life. And laboring with the actors, directors and designers and diving into the world that you have created. And you don’t get that feeling with any [other form].

A+C: What do you believe is the current state and place of theater in America?

Nathan Louis Jackson:The meaning of theater is to get stories out and move people. And we [artists] are finding excuses not to move people and get the stories out. [We] can find place[s] to do that [like the streets]. And the Internet — good Lord, the Internet? That’s a great place. You can’t necessarily do theater on the Internet, but you can speak out and say what you want to say.

In general, we need to not sit still and do nothing when something is wrong. We need to find a way to say [what we need to say]. As an artist, if that’s your medium, then that’s what you need to do. And if you’re not doing it, then what does that say about us? And I think as a nation, that’s what we need to address.