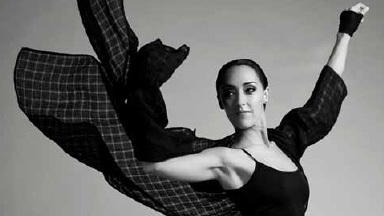 Houston Ballet performs at The Joyce on October 11-14, look making a welcome return to New York City, with a program that includes Jorma Elo’s ballet, “ONE/ end/ONE,” Christopher Bruce’s “Hush,” a comic celebration of life set to music by Bobby McFerrin and Yo-Yo Ma, and Ji?í Kylián’s minimalist “Falling Angels,” based on ceremonial ritual music from Ghana and set to the first movement of Steve Reich’s “Drumming.” Houston Ballet will also perform at the Career Transition for Dancers’ 26th Anniversary Jubilee on October 31 in New York City.

“Danielle is a beautiful dancer with natural talent who I’ve had the pleasure to work with for many years. I have watched her develop from a corps de ballet member to a principal in Australia,” says Stanton Welch, artistic director. “She always delivers an interesting and exciting performance because she is a dynamic and diverse dancer who knows how to tell a story.”

After their Sam Houston State University performance, The Dance Gallery Festival heads to New York City on October 13-15 for a performance at the Ailey Citigroup Theater. Participating Houston artists and troupes include NobleMotion Dance, iMee and independent choreographer Paula Georgudis. According to Andy Noble of NobleMotion, it’s a company milestone.

“I really like the direction our work is going in right now,” says Noble. “I’m curious to see how our efforts translate at the national level.”

“Collaboration and cross-pollination; it doesn’t get any better,” says Michele Brangwen. MBDE will be presenting open rehearsals and performances at the ShapeShifter Lab when it officially opens later this fall.

Kelly Sears, Nick Barbee and Nsenga Knight have residencies at the freshly launched Galveston Artist Residency, a program that grew out of the aftermath of Hurricane Ike.

“I’ve been dreaming up two films to work on while in residence here, including a short science fiction film constructed solely of images from instructional photography books and a feature film about a man who starts at the margins of atomic testing and disappears into the periphery of filmmaking,” says Sears, a former Glassell School CORE Fellow. “I’m fortunate to have some amazing time and space down here to work on new projects.”

DiverseWorks announces the departure of visual arts curator and co-director Diane Barber and the appointment of William Betts as interim executive director. Barber leaves DiverseWorks after 14 years of service to persue independent curatorial projects. She will continue to curate occasional projects at Diverse- Works, including “State Fair,” which runs through October 29. With 60 exhibits to her credit, Barber was known for commissioning new work and sitespecific installations.

Kimberly Stoilis joins the Houston Festival Foundation (HFF) as its president and chief executive officer effective September 21. Stoilis will serve as executive director for all of the activities of the Houston Festival Foundation, including its two major events, The Houston International Festival and the Holiday Parade, presented by H-E-B. Stoilis most recently served as executive director of the Art Colony Association in Houston, producing two Bayou City Art Festivals each year.

“Few events in Houston have the potential to promote international relations and elevate Houston’s status as an international culture, travel and arts epicenter as does the Houston International Festival,” said Stoilis. “I am excited to have been given the opportunity to spearhead HFF’s mission to promote culture through diverse arts programming and outreach.”

HGO, through HGOco, was the recipient of an ArtPlace grant for $250,000, which allows HGO to build HGOco’s capacity by expanding current programs through in-depth collaborations with Neighborhood Centers Inc. and Houston Independent School District in three Houston communities. ArtPlace is a new national private-public consortium of funders led by Rocco Landesmann, the Chair of the National Endowment for the Arts, and national foundations including The Ford Foundation and The Andrew W. Mellon Foundation.

Spacetaker presents “DIY Event & Exhibition Planning,” an ARC workshop with Jenni Rebecca Stephenson and artist/art consultant of Cadence Enterprise Lindsay Peyton, on October 26 at Spacetaker. Learn the ins and outs of planning your own small to large-scale event or exhibition, including tips on establishing and following a time line, programming with a cohesive theme, securing event sponsors, getting insurance, and knowing what local resources are available to you in terms of volunteer recruitment, décor, entertainment, promotion, and more.