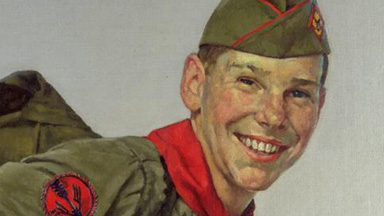 News: Rockwell and the Scouts

The National Scouting Museum in Irving has a new exhibit featuring the art works of Norman Rockwell. In 1912, Rockwell was hired as a staff artist for Boys’ Life magazine. In this role, he received fifty dollars compensation each month for one completed cover and a set of story illustrations.

At the age of nineteen, Rockwell was appointed art editor of Boys’ Life, a post that required him to supervise work delegated to other artists, in addition to creating his own imagery for the periodical.

As his style matured and the Rockwell name became known, he was hired by outside publishers to compose illustrations for children’s books and magazines.

When his tenure began with The Saturday Evening Post in 1916, Rockwell left his salaried position at Boys’ Life, but continued to include Scouts in Post cover images and the monthly magazine of the American Red Cross. He resumed work with the Boy Scouts in 1926 with the production of his first of fifty-one original images for the official Boy Scouts of America annual calendar.

His last commission for the Boy Scouts—a calendar illustration titled The Spirit of ’76—was completed when Rockwell was eighty-two, concluding a partnership which generated an astounding four hundred and seventy-one images for periodicals, guidebooks, calendars, and promotional materials. His connection to the group spanned sixty-four years, marking the longest professional association of his career.