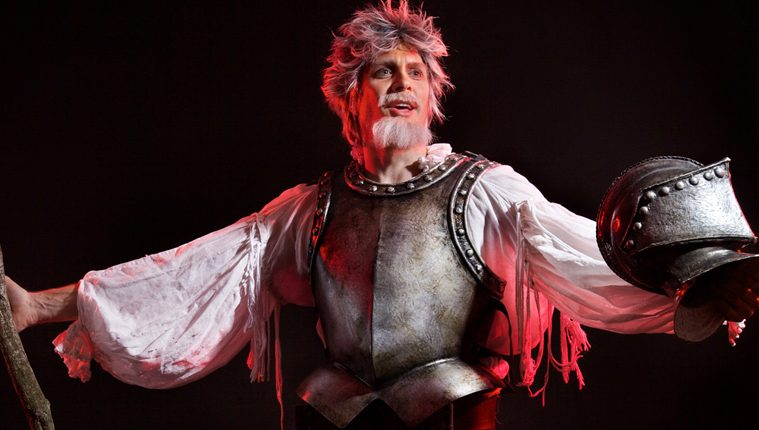 Camelot.
Photo Courtesy of Theatre Under the Stars.

TUTS Takes on a Pair of Classics

During the 1960s — like our own, a time of hope and, if possible, even more traumatic change — Broadway composers, lyricists and playwrights sought inspiration from two dazzling blasts from the past: a pre-English king who dreamed big dreams about noble knights and fair ladies, and a Spanish novelist who wrote one very big book. In the end, both musicals struck audiences as larger than their specific time and place. Both featured heroes that impressed audiences as idealistic in defiance of all available evidence. And both are coming to Houston’s Hobby Center in the new year, courtesy of Theatre Under The Stars (TUTS).

Looking back, our nation’s love affair with Lerner and Loewe’s Camelot probably has as much to do with its association with the tragically short presidency of John F. Kennedy as it does with the enduring power of Great Britain’s King Arthur myth. And our love affair with Dale Wasserman’s Man of La Mancha surely has as much to do with our appreciation of the ever-quirky “knight errant” named Don Quixote as with the Inquisition cruelties visited upon his creator, aging writer Miguel de Cervantes. Yet that multi-layered ambiguity is surely what sets these musicals apart, the way that in the end the idealism they celebrate and demand resides not primarily in the characters but in ourselves.

In discussing the lasting appeal of Camelot (which opens Jan. 22), director Richard Stafford draws on the basic premises of Arthurian legend – as even Walt Disney animators felt they had to in The Sword and the Stone. But he certainly and unashamedly sees the show’s ancient tale as one resonating with Americans by way of the JFK era.

“A young boy pulls a mighty sword from a stone and becomes king of England,” offers Stafford. “Such is the beginning of the legend of Camelot. In 1960, a new president is inspired by the musicalization of the legend, and uses the metaphor for greatness and destiny as he guides the country in the direction of change. Every generation since has remembered those beginnings and yearned for them again — never giving up the search. We are all inspired by the final lines of the play: ‘Don’t let it be forgot that once there was a spot for one brief shining moment that was known as Camelot.’ We continue the search.”

Man of La Mancha.
Photo Courtesy of Theatre Under the Stars.

As for Man of La Mancha (opening Feb. 26), TUTS artistic director Bruce Lumpkin picks up on similar themes within the dual story of a writer finding the strength to face the cruelties of the Inquisition in the words and deeds of the character he has created, as performed with prisoners sharing his cell. Yet even more than in Camelot, Lumpkin is called to wrestle with the power of a single musical moment.

“If you ask an assortment of people from various countries and cultures if they know Man of La Mancha,” says Lumpkin, “most know the show through the song ‘The Impossible Dream’ and can usually sing it — or parts of it anyway. I believe that this song, this story rather, is memorable and appealing cross generationally due to what it represents: hope. The compelling story inspires us to hope and to dream despite our circumstances. And in our current world and cultural climate, hope is something truly beautiful and desirable.”

Camelot just barely made it into the ‘60s, being conceived in 1959 by Alan Jay Lerner and Frederick Loewe (the Broadway team most famous for squeezing romantic My Fair Lady out of George Bernard Shaw’s typically acerbic Pygmalion) as a way of squeezing a musical out of T. H. White’s novel about Arthur, Guinevere and Lancelot, The Once and Future King.

As directed by the legendary Moss Hart, who spent much of the show’s prep time in the hospital, and who died shortly after the 1960 Broadway opening, the original production ran for an impressive 873 performances, placed a cast album at the top of U.S. charts for 60 weeks and a spun off a lavish film version in 1967. Then again, the show had what showbiz types call “good bones” — not to mention a cast led by Richard Burton as Arthur, a pre-Mary Poppins Julie Andrews as Guinevere and a handsome baritone named Robert Goulet making his Broadway debut as Sir Lancelot.

In addition to the innovative book by Wasserman (based on his non-musical teleplay I, Don Quixote), Man of La Mancha marched onto stages in 1965 on the strength of its stirring music by Mitch Leigh, and perhaps even more stirring lyrics by Joe Darion. (Intriguingly, the poet W.H. Auden took an initial swing at penning the lyrics, but his were rejected as being too sarcastic and political.)

As it worked out, all the show’s strengths came together during the “play within a play” about Don Quixote, in that moment the aging knight explains to his idealized love Dulcinea what it means to be, well, him. “The Impossible Dream” became a standard for singers everywhere, from lounges to opera houses, though the song is also profoundly associated with Broadway’s original Cervantes/Quixote, Richard Kiley.

The original production ran for 2,328 performances and picked up five of that year’s Tony Awards, including Best Musical. Like Camelot, Man of La Mancha inspired a big-budget movie, with a lip-synching Peter O’Toole taking on the “quixotic” lead role and no less than Sophia Loren as his love Dulcinea, who is “really” a strumpet named Aldonza anyway.

And also like Camelot, La Mancha has been revived on Broadway and elsewhere many times, most recently with Brian Stokes Mitchell winning delirious praise for his acting and especially for his singing.

It will be fascinating on at least two levels to consider Camelot and Man of La Mancha side-by-side in a single TUTS season: as more traditional Broadway relics of the same 1960s that gave us loud rock musicals full of salty language and onstage nudity exemplified by Hair, yet also as iconic examples of 20th century musical theater’s best efforts to use the art form to inspire us all.

In teaching us to expect something more from our days and nights on earth than mere existence, these two musicals (like their subjects, however real they were in history) may indeed be giving history a nudge in the right direction.

Hobby Center for the Performing Arts