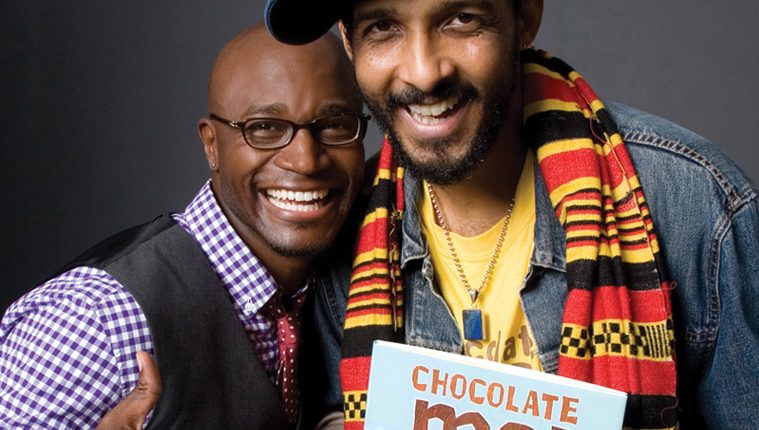 Taye Diggs and Shane Evans will be appearing at the BooksmArT Festival on June 9 at the Dallas Museum of Art. The duo created the children’s book, help Chocolate Me.

A day packed with appearances by top children’s book authors and illustrators, free workshops, art tours, music and theater performances, plus an appearance by a Hollywood actor are what the Dallas Museum of Art has planned for the second annual BooksmART Festival on June 9. This year’s will be the second annual festival for families and children of all ages.  Last year saw 5,000 participants.

“So often, when authors come they give a speech and go away,” said the DMA’s Laurie Stephens, Arts & Letters Live Program Manager. “At BooksmART they will do multiple things. They will give a formal presentation about their writing and how they got into it. Then, the writers will go up into the gallery and read their work in front of a piece of art.”  Historical fiction writer Deborah Hopkinson, for example, will read from her Titanic: Voices of the Disaster in front of Frederic Church’s “The Icebergs.”

Actor and now children’s book author Taye Diggs will also be one of the participants this year. He will be reading from his book Chocolate Me, which was released last September.  Diggs worked on the project with his childhood friend and renowned illustrator Shane Evans.

“It’s based on a poem I wrote in college about something that happened when I was five,” says Diggs. Growing up in Rochester, New York, Diggs tells A+C that he was one of the only black children in his neighborhood. That experience caused him to be uncomfortable in his own skin. It was his mother who helped him to see his own beauty.

“The main theme of the book depends on what your own situation is,” says Diggs, “but the universal message is about self-esteem and self-acceptance.”

“Once a child realizes that a real person wrote those words and has a personality, it’s truly inspiring,” says Stephens. “They are inspired to read or write more.”

BooksmART will offer participating kids a chance to try their hands at creating their own work. Free writing workshops will be offered. The art work seen during tours of the museum will serve as a spring board for creation.

Also appearing will be award-winning author rebecca Stead, whose sci-fi novel When You Reach Me, is a Newbery medal winner.

Children with an interest in drawing will have plenty of opportunity to learn about illustration and the art of telling a story through pictures. Fort Worth native Jonah Winter, who is author of picture book biographies will discuss his books on artists including Just Behave, Pablo Picasso! Pop-up book engineer Bruce Foster (Wow! The Pop-Up Book of Sports and Harry Potter: A Pop-Up) and paper-cut story artist Béatrice Coron will lead interactive workshops throughout the day.

In addition to the literary events, participants will also be treated to musical performances by Hugworks and selected songs from Dallas Theater Center’s upcoming performance of Andrew Lloyd Webber’s Joseph and his Amazing Technicolor Dreamcoat. A complete schedule of events can be found by clicking here.

Stephens says one of the goals in putting together BooksmART’s diverse and wide-reaching programming, was to give all participates an opportunity to see and experience some of Dallas’s arts scene in general.

Diggs says his passion and ultimate career in the arts grew first from his love of reading.

“I didn’t have many friends growing up so as a child I read constantly,” says the Private Practice TV star. “It sparked my imagination and helped with how I spoke. Reading influenced who I am today and how I look at the world.”

A Ball for Daisy won the 2012 Caldecott Medal. In this wordless book by 2006 Caldecott winner Chris Raschka, an irrepressible little dog’s most prized possession is accidentally destroyed. It is a buoyant tale of loss, recovery and friendship.

Don’t Forget: God Bless Our Troops, written by Dr. Jill Biden, Vice President Joe Biden’s wife. The book tells a story through a child’s eyes of what family life is like when a parent is at war across the world.

Just Behave, Pablo Picasso! provides glimpses of the energy, enthusiasm, and dedication that ruled the artist’s world and delivers a pungent message to today’s young artists: don’t be discouraged if your creative efforts are criticized. By dramatizing Picasso’s development rather than merely recounting it, author Jonah Winter keeps readers fascinated, and by making Picasso a superhero — he bursts right through the canvas.

When You Reach Me is a Newbery Medal-winning science fiction and mystery novel by Rebecca Stead. The story is centered around timely coming of age themes. The novel is a mystery set in the gritty reality of New York City in 1979, with glimpses into the future.

Beloved children’s books author and illustrator Daniel Kirk wonderfully brings to life the story of Sam, a library mouse. In Library Mouse: An Art Adventure, Sam makes an after-hours visit to the museum to explore art and artifacts from across centuries and unexpectedly makes friends with another artist.

Abra Cadabra, Patas de Cabra is a charmingly told folk tale in both English and Spanish by Dallas author Alejandrina Drew. The stylized folk-art illustrations are effective in conveying the narration for little ones, too.