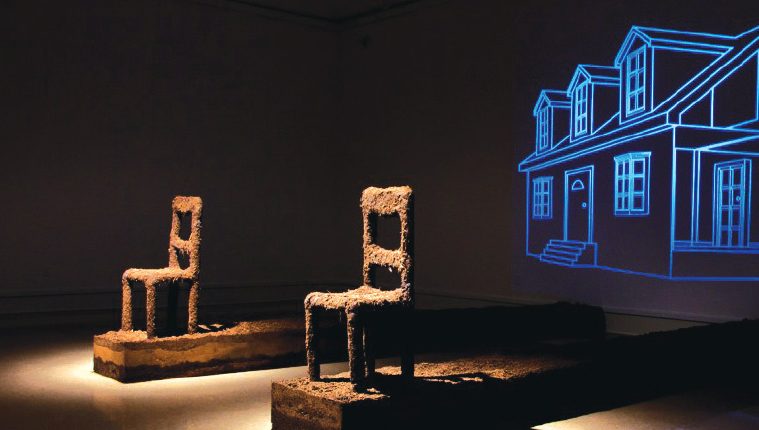 “I’m interested in politics, the idea of connecting to the earth — as in artist Ana Mendieta’s ‘Silueta’ series,” says Divya Murthy, curator of “It’s a Phase,” an exhibition of on-site artist projects at Russ Pitman Park that encourages the evolution and deeper consideration of the broad (if not outdated) term “environmental art.”

Invited to curate the show by previous park exhibition organizers June Woest and Lucinda Cobley, Murthy considers the process to be an organic learning opportunity, considerately explaining, “It feels kind of like cooking in someone else’s kitchen. When you’re done, you make sure everything is put back in order, and then you have to give the kitchen back.”

Russ Pitman Park, located in Bellaire, Texas, just inside the 610 Loop, is a lush four-acre public home for native Texas plants and wildlife — and artworks, at least temporarily. The park’s significant landscape and wildlife (a variety of beetles, large beehives and over 80 species of migratory birds) allows artists to articulate, through their individual art¬works, relationships to a specific site and its environment. This is not the first time art has been installed in the park, but it is the first large-scale exhibition Murthy has curated.

After a public call for proposals and word-of-mouth recommendations, Murthy invited artists Lina Dib, Ned Dodington, Tobias Fike, Allison Hunter, Barna Kantor, Gabriel Martinez, Adinadi Meza, Emily Sloan, Annie Strader and Matthew Weedman to participate in the exhibition. She has spent the last several months facilitating the installation of the projects within the borders of the park.

Murthy is quick to point out that “It’s a Phase” is an exhibition about artwork in a specific environment, but it’s not specifically environmental art. While “green” issues of sustainability are not a primary concern of the exhibition, Murthy and the artists welcomed the opportunity to more fully consider the impact and integration of the artworks with the help of park educator and staff naturalist Eric Duran. Duran aided in the artists’ introductions to the park, project development, and installation, an invaluable role since the majority of the participating artists did not have a relationship with Pitman Park until Murthy contacted them.

Enter Dodington — whose radar admittedly gets pretty weak past Kirby. He had no idea that the park existed prior to Murthy’s park exhibition project. Dodington’s general art practice is based on forming connections, illustrating over¬laps, and exposing inconsistencies in an anthropocentric world-view, with a goal to make visible the actions of life and cross-species interaction and participation.

For “It’s a Phase,” he is trying to talk about, or talk with, the birds in Pitman Park. He describes, “My project ‘Urban Aries’ is a way to illustrate alternate ways for birds and humans to participate in the time-honored tradition of watching — be it at a feeder, a perch, or a nest. It is a collaborative cross-species approach to architecture and design, and also simply to help me gather data and test some scenarios about this whole idea.”

Allison Hunter, who admires the seemingly laid back attitude of the park, was able to keep her project ideas flexible. She initially proposed a music video based on snails and the sounds they make as they move across surfaces. However, she wasn’t able to find the snails, much less record their movements. She also learned that snails are deaf. For her, it seemed sad to make music that they couldn’t hear, so she went back to the drawing board.

In light of her introduction to and experiences in Pitman park, Hunter says, “There were lot of moments where I was amazed at how things in the park were not as they seemed. I want to bring that kind of surprise to my work.”

For that reason, she is keeping the finer details of her installation under wraps until the actual presentation, revealing only that it will involve a video and a small enclosure.
Other artist projects in “It’s a Phase” include “fake” holograms, listening posts, a cosmos display, drawn stencil pieces, and other interventions such as use of the park’s leisure spaces (i.e. benches).

Murthy looks forward to seeing how the exhibition will move beyond this phase and into the next, resulting in the expansion of art term definitions and the pro¬motion of Russ Pitman Park — not only as an incredible ecological pocket, but as an alternative exhibition space for artists to create new works.

— NANCY ZASTUDIL
Nancy Zastudil is an itinerant curator who parks herself in front of artworks whenever and wherever possible.