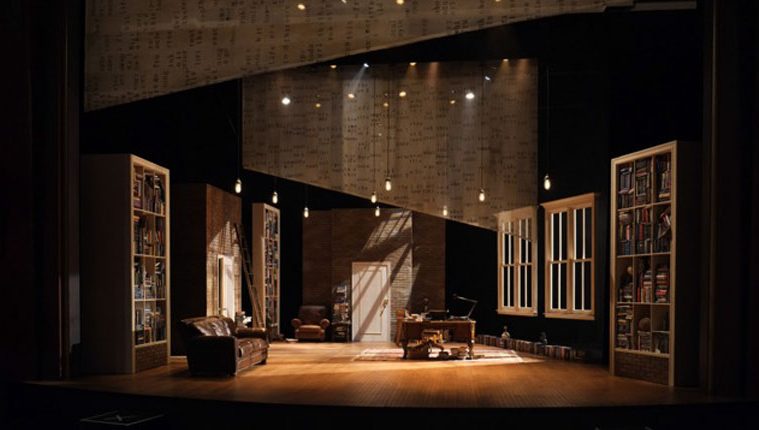 In 2008, Jodi Bobrovsky bought a taxidermied dog and began Googling images of shotgun wounds. “I have researched a lot of interesting things,” she says. “I’m sure the government has me on a  list somewhere.”

Bobrovsky isn’t a threat to national security; she’s the properties manager for Stages Repertory Theatre. She has designed and dressed scenes for companies all over Houston including Main Street Theater, Catastrophic, and Classical Theatre Company.

The aforementioned petrified pooch was used in Stages’ production of Craig Wright’s play Lady, where the titular pet is killed in a hunting accident. “Normally, the dog dies offstage, but the director (Leslie Swackhamer) wanted us to see it,” Bobrovsky says.

In order to make it realistic, Bobrovsky cut the dog into pieces and reassembled it with rope and string inside to make it appear limp. She then recovered it in fur, smeared blood all over it, and attached a mechanism in the tail.

“When the actor was holding it, its tail, kind of, raised up a bit before it died,” Bobrovsky says, using her hand to mime the last couple of wags. “You could hear the audience go ‘ahhhhhhh.’”

That moment lasted a couple of minutes – nowhere near the time it took for Bobrovsky to create it. But that’s the core of what set designers and property managers do. They slave over the moments that string a story together and keep the audience (and the actors) engaged.

“There is no play, but ‘what kind of a place do you need to tell this story?’” says designer Kevin Rigdon. “What do you need as an audience to go on this journey?”

Kevin Rigdon’s model for Just Like Us for Denver Center Theatre.
Photo by Kevin Rigdon.

Rigdon is the head of Graduate Design at the University of Houston’s School of Theatre and Dance and the Associate Director of Design at the Alley Theatre. He has designed many “places” for theaters from Houston to the United Kingdom and garnered a number of Joseph Jefferson and Drama Desk awards along with a couple of Tony nominations.

Rigdon speaks a lot about the ability of a designer to suspend the audience’s disbelief when creating an avenue for storytelling.

“And it’s a not a ‘look at us, look how clever we are,’” Rigdon explains. “There is an impact to that story.”

In 2011, when working on Rajiv Joseph’s Monster at the Door for the Alley, Rigdon says the play called for an actor to lose oxygen and hallucinate … under water. “Well, I can’t flood the stage, but what I can do is suspend him in the space, and if I pick him up from the waist, he’s in control and he can swim. If you put a few things together – a little bit of light, a little bit of movement – I’ve told you he’s in the ocean swimming – it doesn’t have to be ultra-real. You buy it, you believe it, we go on.”

Designer Ryan McGettigan leans toward the abstract as well. (Houstonians likely remember his remarkable use of trapdoors for the Classical Theatre Company’s production of Ubu Roi.) McGettigan is the resident scenic designer for Cape Red Theatre in Massachusetts, and has designed sets for theaters all over the United States, including local companies such as Houston Grand Opera, Stages, Main Street Theater and Rice University’s Shepherd School of Music.

His recent design for Stages’ production of The Language Archive featured a file cabinet that seemed to grow up and out of the floor. But the surrealism didn’t end there. “Then it turns into a bakery,” he says and explains how as the scent of bread is sprayed into the audience, the file cabinet drawer fronts flip open and turn into bakery shelves.

“And there’s like three million loaves of bread. That, I love: Like, here’s what you’re looking at the entire time, which is weird in itself. You’re drawn to it because you don’t know everything about it and that’s what’s exciting – That’s what’s exciting about most things:  If you know everything about it, why bother? Then, after staring at it for the past hour-and-a-half, it changes in this big way,” explains McGettigan.

When working for Cape Red in 2010, McGettigan designed the set for Eurydice, a play chronicling a mythological Greek woman’s unfortunate journey into the Underworld. For that play, McGettigan strung tiles together to create a structure similar to a beaded curtain, but to the audience, it looked like a solid wall. Once again, McGettigan defied and surprised.

“As [she] descended into the Underworld, it was her slowly going across this curtain and the entire world starts shaking like a dream sequence in a movie where everything becomes wavy,” McGettigan explains.

These are obvious aspects the audience can’t avoid noticing, but the set is also dressed with a litany of objects that patrons assume are just pulled from a prop closet and thrown onstage. But everything, from the couch to the drawer handles, is there to help drive the story.

Bobrovsky says when she’s looking for a suitcase for a scene, she’ll ask for advice from the actor who will use it. “What does it look like? Where did you get it? Do you care where it came from?” she says, adding that these questions force the actors to think about their characters. She recalls another time where she made a driver’s license to stick inside a wallet. “Nobody saw that but the actor, but it helped him see himself as that character,” Bobrovksy explains.

For Catastrophic’s production of Anna Bella Eema, the actors sat at TV trays surrounded by piles of trash. It looked like she just called Waste Management and had them leave a street’s worth of debris onstage, but many of those items had purpose.

“I had to work with the sound designer, because it’s a musical. We would have an actor spin a marble in a bowl, but it didn’t make a perfect A, so we had to find a larger marble,” she recalls.

In American Buffalo, Rigdon created a junk store owned by the protagonist, but he didn’t just fill the stage with anything he could get his hands on. Every object mattered because the story wouldn’t work unless they did. He explains it’s just like writing the script.  “I know that every playwright that is any good has labored over every single word in a play. Every dot, every dot-dot – every, whatever punctuation mark there is, is chosen. None of this is random.”