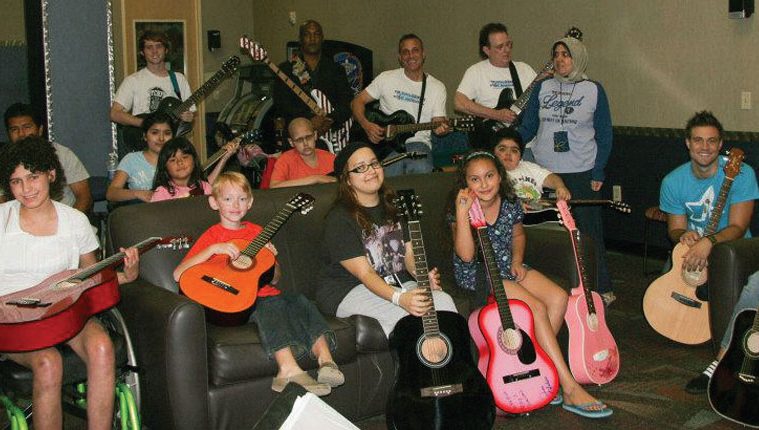 There are three rules in a guitar lesson with Daren Hightower: 1) Always wash your hands; 2) Have fun; and 3) Play it forward.

It’s a Sunday afternoon when I arrive at Hightower’s house to sit in on a lesson with a 9-year old named James, who has a tooth-filled smile that is almost as big as his face. He also has Aspergers Syndrome, but you wouldn’t know it as we both slowly work our way through the first notes of “Smoke on the Water.”

Hightower has been teaching students like James tuition-free for  the past 25 years, and is the founder, director and chief of everything at the Children’s Music Foundation, whose mission is to spread the magic of music to young people who might otherwise not have access.

Given the recent history of budget cuts affecting school music programs, including last year’s 5.4 billion dollar cut from the education budget by the Texas Legislature, the time is right for the non-profit world to step up to the plate.

As the role of music is disappearing in the public school system, there are more organizations looking to see how they can help fill the gap. Children’s Music Foundation and Music Doing Good are two such organizations in Houston that are hard at work, providing access, instruments and music education for children.

After a rough patch in his life, Hightower discovered the guitar and a love for music. After getting started with a twenty-dollar six-string guitar, he immediately began to share his love for music, playing for his customers and ultimately teaching one of his co-workers how to play as well. It was through one of his clients that Hightower got connected with a local orphanage. Turned out that sixty-three children — the entire population of the orphanage —  wanted lessons.

“So, that is when I founded the Children’s Music Foundation,” says Hightower. His all-volunteer organization is financed completely out of his own bank account. Hightower also left his very successful career as a full-time finance manager and became a consultant, allowing him to limit his work week to just three days per week, and to devote the rest of his time to his non-profit.

Through a speaking engagement at the Skyline Rotary Club, he met two people who altered the future of the Children’s Music Foundation: Reggie Adams, founder and director of the Museum of Cultural Arts Houston (MOCAH), and Don Vaughn, a neuroscientist, musician and model.

MOCAH is the beneficiary of a treasure trove of musical instruments from the music store Austin Bazaar. Adams initially approached the store looking for damaged items that he could turn into art projects. What happened next was unbelievable: In its first shipment the store delivered almost 10 palettes worth of instruments, about two-thirds of which were still in fair to good condition. Adams couldn’t bring himself to turn these playable instruments into sculptures, so he called Hightower, who now makes a monthly trip to Austin to pick hundred of instruments ranging from guitars to accordions.

Music Doing Good (formerly known as Diva’s World Productions) has also recently launched a program matching needy young musicians with instruments. They are in talks to partner with MOCAH and the Children’s Music Foundation, with hopes of impacting the Houston area public school-based band and orchestra programs. They have already set up drop-off booths at several Houston Symphony concerts in an effort to solicit anyone who may have an unused instrument hiding in their closet or attic.

“Personally, I have four friends that I know have an instrument sitting in their spare bedroom that has not been touched in years,”  says Kirsten Johnson, Music Doing Good’s program director. “I was in band too. It was one of the best things that ever happened to me. It taught me about discipline, how to treat others, team work and about being a part of something bigger than myself. Why not help give that to another child?”

As Johnson points out, the benefits of exposing children to music are innumerable. Recent studies have suggested improvements from better brain function, better test scores and social skills, but for my new friend James, it’s very simple. “I love to play guitar because it helps me sort out all of the thoughts in my head,” says James. After spending an hour with him, I can relate. Somehow, all of the thoughts in my head are sorted out as well.