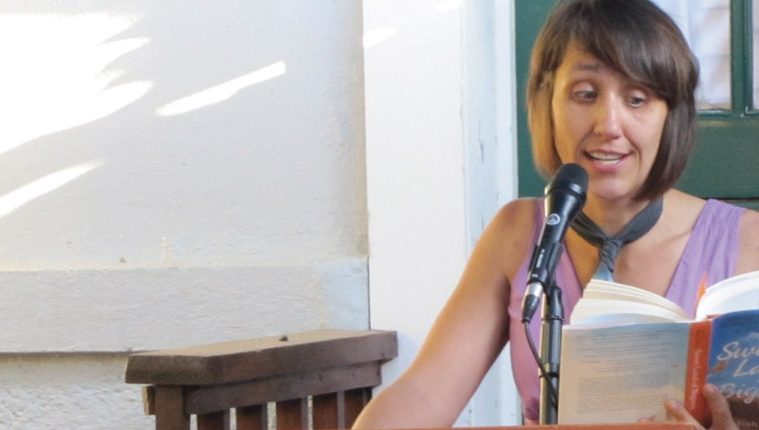 Portrait of a Writer

As a young writer, I dreamed I’d find a patron. She’d be blond and smartly dressed, a Lynn Wyatt type, and she’d take me under her well-formed wing and bake cookies while I pecked at the keys of a computer in a back room of her cold house. What ever happened to the lost art of patronage, when wealth needed expression for its guilt and solitude? Maybe wealthy people don’t feel so lonely and guilty anymore. Or perhaps, patron energy has been redirected, evolving into a more sophisticated animal, the nonprofit.

Inprint, Houston’s patron saint of writers and writing, is celebrating their 30th year in existence. The original focus of Inprint’s patronage, The University of Houston’s Creative Writing Program (UH CWP), draws writers from all over the world to Houston. Over the years, Inprint has funded over 700 fellowships and prizes to more than 500 individuals. As these writers work through their educations, they lean on Inprint for funding, space, work and support.

Houston’s writing community has a large spread, like the city itself. And Inprint has expanded to serve as a connecting link, a place that draws all Houston’s writers in at one point or another. There is an entire community of people living in Houston, living lives that have been shaped by Inprint’s presence. Meet four:  Miah Arnold was terrified to interview Chitra Divakaruni and Gish Jen at the Hobby Center for Inprint’s reading series last spring. Afterward though, she was glad she did the interview and grateful that she did it in Houston. “The Houston crowd was the first to take me seriously as a writer,” says Arnold.

Arnold first encountered Inprint in 1998 at UH CWP’s “Welcome Back Meeting”. The Inprint staff stood up and introduced themselves to a small group of writers from all over the country. Inprint had supplied most of them with fellowships to pursue their MFA’s and PhD’s. Arnold had come to Houston to begin her master’s degree in creative writing, and she would later earn her PhD as well. Without the fellowship, she simply could not have come. Inprint was first to give Arnold an opportunity to teach writing workshops. Fourteen years later, when her first novel was scheduled for publication, Inprint staffers, Marilyn Jones and others, sat down and helped Arnold brainstorm ways to publicize her novel. Arnold confides that her $10,000 Inprint contest prize was central to giving her the opportunity to write the novel itself, Sweet Land of Bigamy, published this June by Tyrus Books.

Writer Brandon White was struggling to adjust to life in Houston and the graduate school ecosystem after life as musician in Harlem in 2007. Not long after White arrived, he crossed paths with Inprint staff and took a position teaching Senior Citizens in Acres Homes. White began building a steady following for his writing workshop at Lincoln Park Community Center. He points to his time there as the key to helping him adapt to life here. “Reading Sula with the seniors in Acres Homes definitely gives you a different perspective than the one you get in a [graduate] workshop.” While teaching the seniors has clearly shaped his experience in Houston and his creative life, he stops short of seeing his own role in shaping the lives of his students. “I just give them the opportunity to write down the stories that they normally tell…they are clearly the storytellers in their family.”

In the process, White says he feels like he found a family at Inprint. Staff member Krupa Parikh worked closely with White on his manuscript to complete his MFA. White credits Inprint with nurturing his writing life, exposing him to the literary world, funding his education and giving him an opportunity to teach in the community.

Leah Lax is the mother of seven children. She was suffering from bouts of punishing insomnia. She couldn’t sleep, so she wrote. In her free time, she took to the public library to read poetry. The more she read, the more frustrated she felt by what seemed like an ever-widening gap between what she wanted to write and what she was putting down on paper. A friend suggested that she take a class at Inprint. Lax inquired but realized she could not afford the tuition.

Inprint found Lax a sponsor, and she attended a writing seminar on a scholarship. Lax explains that, “Reading and learning to write helped her find a community…she wrote her way” into another life. Someone from her workshop suggested she apply to graduate school. Three days before the deadline, Lax applied. She had a letter of recommendation from a fellow writer and the teacher of her Inprint seminar. When Lax was accepted to the UH CWP, she was offered an Inprint scholarship.

It took nearly five years attending school part-time to finish her MFA. After graduation, Lax began teaching the very same seminars where she had been a student at Inprint. In 2006, when the Houston Grand Opera was looking for a writer to commission an opera based on the immigrant experience, Rich Levy from Inprint recommended Lax.

When it was staged in 2007, The Refuge received a full page review in the New York Times. Soon after, Lax borrowed a room on the top floor of the Inprint house and informally became Inprint’s first writer-in-residence. With funding from the Houston Endowment and the Brown Foundation, Lax wrote Not From Here: New Americans and their Journeys entirely in the attic of the Inprint house. The book is scheduled for publication next year by Bright Sky Press. This spring she will be teaching her 17th seminar at Inprint.

Marc Grossberg received his first rejection from the New Yorker when he was sixteen. Despite efforts to keep up a writing life, Grossberg went to law school and became a successful lawyer. Invited by a friend, he joined the board of Inprint nearly 25 years ago. Through Inprint, Grossberg found a place to focus his literary desires and eventually served two terms as board president. Attending the reading series, meeting and discussing the important writers inspired the lawyer to keep tinkering at his own writing. With some guidance from memoirist and Inprint teacher Emily Fox Gordon, Grossberg published an essay in Tablet magazine and finally completed writing a novel manuscript. “I don’t know that if I had written the book if not for Inprint,” Grossberg admits.

He points to Inprint’s healthy inception by a UH CWP founder, Donald Barthelme, and writer and Rice Professor Kathleen Cambor and her husband Glen. “Inprint started as a way to raise money to support the Creative Writing program and now it’s a window for the whole community of readers and writers…If you want to hear Salman Rushdie read or learn to write your stories for your grandchildren or take your kids to see the guy who wrote Lemony Snicket...Inprint is there.”

Whether we teach or take classes, attend a reading or book club, or subscribe to Gulf Coast, Houston’s literary minds all intersect with Inprint. And if you have the luck or the brass to cross her path, Inprint is a gracious patron and fosters every person (in the Greater Houston area) who believes that they have words written on their insides that must be let in or let out.

-NICOLE ZAZA
Nicole Zaza has worked as an editor for Gulf Coast and Envy Magazine. A Houston native, she graduated with an MFA from the UH Creative Writing Program on an Inprint fellowship. She works as an adjunct professor at San Jacinto Community College and teaches writing classes at Inprint.