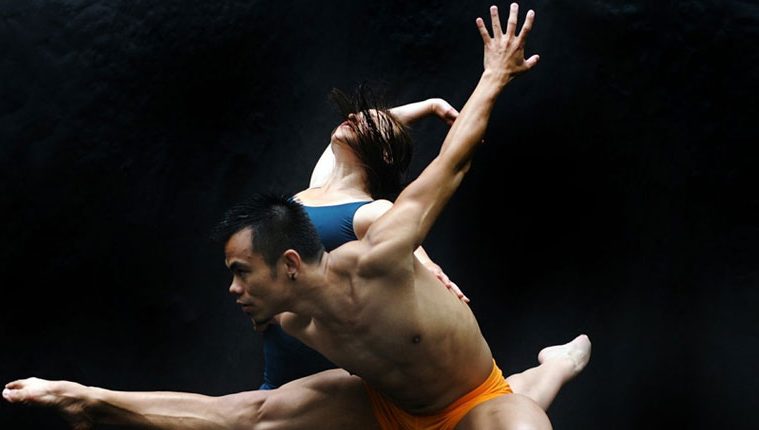 ERJCC Scratches A Niche: The 33rd Annual Dance Month at the Kaplan Theatre

Take, for example, the revival of Houston Choreographers x6, a program designed to present premiere work by six of Houston’s professional, but still emerging, choreographers on the Kaplan Theatre stage January 26 and 27.“Any opportunity to present work is important to Houston artists,” Silberstein explains. “We have a vibrant community of dancers and choreographers so we try to give them that opportunity.”

Until several years ago, Choreographers x6 was a regular feature of the annual post-holiday affair. “For 14 years, we had different choreographers every year,” Silberstein recalls. “Then, there came a time in the Houston scene where all of a sudden there were other companies or people who were starting to present programs introducing new choreographers.”

Choreographers x6 was shelved for a few years but returns this month. Why now?“There is a new pool of choreographers that we have not presented and yet they’ve already proven themselves as choreographers,” says Silberstein.

This pool includes Kristen Frankiewicz, Laura Gutierrez, Lydia Hance, Erin Reck, Jhon R. Stronks, and Sandra Organ-Solis. Organ-Solis appeared on the playbill for the very first Choreographers x6. This time, she’s crafted Ella, a tribute to Jazz icon, Ella Fitzgerald. It will be just one of a diverse selection of new dances premiering on the family-friendly mixed bill.

Dance Month programming goes beyond providing space and stipend for six artists, however, also giving Houston-area students and pre-professional choreographers a chance to show their work, providing master classes for dancers, lecture demonstrations in schools, and this year, an occasion to highlight Dance on Film.

Consider that Silberstein annually selects a dynamic, professional dance company on the rise to headline the Houston happening, and the role of Dance Month as a cornerstone event within the local dance community becomes very clear.

This year, Silberstein set her sights on Company E, a small repertory company from Washington D.C. only in its second year. Paul Gordon Emerson, Co-founder and Executive Director of the company, is no fledgling, though.

He came late to dance at age 27, yet somehow his unique and varied history in the arts and government – he’sworked in campaign politics, defense and foreign policy analysis, served as a legislative director, a radio and cable-TV broadcaster, a journeyman in construction and design, and he’s a published author, dabbles in sculpture, and is an accomplished photographer – melds within this art form and within Company E, which aims, not only to perform high-quality dance, but also serve as international cultural ambassadors for the U.S.Company E has already built partnerships with the Embassy of Israel, the Embassy of Spain, and have traveled to the Central Asian nation of Kyrygzstan to engage in cultural exchange with Samruk Dance Company, a relationship fostered and supported by the U.S. Department of State and U.S. Mission to Kyrygzstan.

Silberstein first read of Company E in The Jewish Daily Forward as they prepared to debut their first home-town performance, NEXT: Israel at D.C.’s Shakespeare Theatre, which featured the work of some of Tel Aviv’s most progressive choreographers.“

We asked for a program that featured Israeli choreographers,” Silberstein divulges, “because I think, and Martha Graham felt the same way, that Israel has some very strong dancers and choreographers, and because we’ve had Roni Koresh and Andrea Miller on our stage before.”

The one-night-only performance NEXT: An Evening of Choreography of Israel and Spain on February 9 at the Kaplan will indeed feature Theatre of Public Secrets by Roni Koresh (founder of Philadelphia-based Koresh Dance Company); and two works, Alma and Inside It’s Raining, by English-Israeli choreographer Rachel Erdos.

As the program title suggests, the Kaplan audience will also stamp their passports in Spain with the performance of Y, a collaborative work created by Company E for their evening-length Kennedy Center performance of Looking for Don Quixote, and Few by Barcelona choreographers, Thomas Noone and Nuria Martinez. You Go First, by New York dancer and choreographer, Loni Landon, brings a touch of home to the evening’s trot around the globe.

“We look for smaller companies while others bring in bigger, more well-known groups and we look for very strong companies, the majority of which have not been in Houston before,” says Silberstein.

“It’s a big risk for us to bring companies to Houston, and yet, I think this is part of our niche.”

-NICHELLE STRZEPEK
Nichelle fills a niche in the online dance community by blogging about dance training and education at DanceAdvantage.net. In addition to raising two young children, she is a freelance contributor to Rockettes.com and other dance websites.