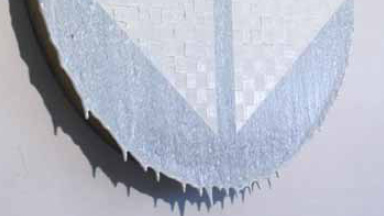 JOSEPH COHEN BENDS THE LINE between concretion of materials and sublimity in presence. His work could be summed up in the trite statement “it is what it is” but this doesn’t elucidate why even the most unlikely materials for constructing the sublime can, cialis through art, unhealthy become so.

Returning from a residency abroad, generic Cohen brings with him new works that strive to change the nature of contemporary painting within the boundaries of the concrete process. The series of works in his upcoming Wade Wilson exhibition were completed during the Martignano International Artists Residency in Lecce, Italy.

Cohen participated in two exhibitions in Leece: a solo show at Carlo V Castle titled “Proposizioni” and “Vessel Traces” a collaboration with with artist Joshua Hagler at Chiesa San Giovanni di Dio- Shown, a small baroque church. In both exhibitions, Cohen’s paintings were transformed as they were placed on holy altars and against eighteenth century brick. From completely different lineages of aesthetics, Cohen’s paintings and the ornate architecture of Italy’s Catholic past converge on a line that enhances the power of each.

Although Wade Wilson’s gallery is not an 18th century altar, Cohen’s paintings resonate with the same demure sublimity in presence, while maintaining strength from their selfcontainment.

“The artwork is not derived from any source except itself, unlike abstract painting or minimalism it refers to nothing outside itself,” states Cohen. This statement may quiet questions for some, but lead others down a philosophical path to infinity. Influenced by concrete masters like Joseph Marioni and Robert Ryman, Cohen strives to reinvent painting. With such a daunting task ahead of him, it’s no wonder he studies philosophy in his relentless pursuit of painting something new.

Cohen leans toward philosopher Arthur Schopenhauer’s definition of beauty in that it should be unconscious, insisting, “If you strive for it or start with the idea of beauty when beginning an artwork you will lose it altogether.” For Cohen, leaving a canvas face consumed by color or extending the paint beyond its natural form goes against his philosophy. Cohen does not paint flowers or porcelain nudes for this very reason but such subjects do not interest him as much as the endless chemical and physical components of paint. Building up layers and forms with paint, Cohen considers his material as a sculptor would: “Sculpture was a big part of my early practice,” he says. “I think it still influences the work.”

Like Bernini to marble in the Borghese is Cohen to Home Depot house paint off I-10. He is an architect with building blocks made only of pigment and the constraints of the universe, paint and all it could possibly be, makes up a large part of Cohen’s artistic process. Unlike Marioni, who only uses three colors in his paintings, Cohen wants to focus on pushing the boundaries of paint as far as a concrete painter can. “Marioni limits his color palate to the primaries, I don’t want to restrict myself to a few colors,” he says. “I want really want to see how far I can go within the constraints of concrete painting.”

The viewer can look through his paintings, not just at them. Like TV sets turned on to an endless static, they shift and move slightly, but are contained to small components of visible matter. These subtleties in color, form and material are not always apparent. For example, one large painting can take up to 400 hours of layering paint both on the top and bottom of the painting’s structure. What started as a lush blue on the face of a painting will ultimately seem like toothpaste white. Underneath hundreds of paint layers lies a heavy skeleton of wood board providing a flush surface for paint to act as paint with little interference. The manipulation of material is akin to the difference between a microphone set on low and a megaphone, it is a manipulation of subtleties.

The titanium faces of Cohen’s paintings under streams of light shimmer and sheen as they shift like white holograms. Along with the slight undulation in color, the surface begins to look as if it was lit from within. Light refracting and reflecting against pigment finds its way through the layers of paint and back to the eye’s rods and cones. Peering into the layers of Cohen’s paintings, it’s evident that his surfaces are an artistic treatise on the characteristics of light. One of the most intriguing discoveries in quantum mechanics was wave-particle duality. The long-debated hypothesis explains that, atomically, light can act as both a particle and a wave. This fundamental paradox of the universe describes the nature of Cohen’s concrete paintings as they teeter on the edge of particle-like self referentiality and wave-like possibility of the marvelous. Like the elusive nature of light, Cohen’s paintings shift between solidarity in their form and fluidity in their color. This transmutation creates a visual space where paint acts as a vessel for the sublime.

— DEBRA BARRERA
Debra Barrera is a local writer and artist.