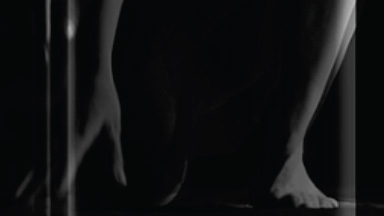 From time to time a work comes along that genuinely surprises you. And Frank and Kristin Lee Dufour’s audiovisual installation at the Dallas Museum of Art (DMA), try “Acoustic Shadows, view ” has the potential to do just that, but only if you’re observant.

The multimedia presentation shows in the theater located at the Center for Creative Connections, a dynamic place for new interactive learning experiences, that is housed inside the DMA.

The installation reinterprets the myth of Orpheus and Eurydice, a myth that finds its center in the inevitability of the underworld and its pathos in a love twice lost. The power and finitude of hope arise as the story’s horizon. It is a lovely, dark myth with imagery that will linger in the shadowy recesses of your dreams. And “Acoustic Shadows” attempts the same resonance.

The artists have created a work that uses images and sounds to draw you into that tenebrous world. As you take in Orpheus and Eurydice moving within the darkness you notice the disjointedness between time and motion. Hair and fabric seem to flow at a different speed than the figures themselves. Such a small but discernible cleavage between time and motion educes the thought that such might very well be the physics of the underworld.

Yet it does not take long to realize that the sounds inhabiting the space have probably done more to set the atmosphere than the imagery. They are chimeric and suggestive: dripping, ringing, echoing, piping, crawling, singing — aural shapes of a ghostly dimension of inevitable sorrow. It’s as if Orpheus’ musicality has become a haunting feast of penumbral tonality.

True to the source material, the tragedy is unavoidable, it is fated. Orpheus still looses Eurydice. Then the work starts right back up again. And it’s here that the opportunity to be surprised comes forward: the work changes. Not according to anything predetermined by the artists, rather in response to what you do. The work is interactive. The room listens to the audience’s movements (or their “acoustic shadows”) then tells the system, which responds by adding white shadows to the video. But you’ll only notice this if you’re paying attention.

In the end, witnesses become participants and co-creators. This begs the question of boundaries and agency for artists and audiences alike. That hermeneutic conundrum aside, this work, like the millennia old myth upon which it is based, asks you to read yourself into the text. Its interactivity invites your imprint. And if you know it is happening, and you catch it, it will certainly surprise you.