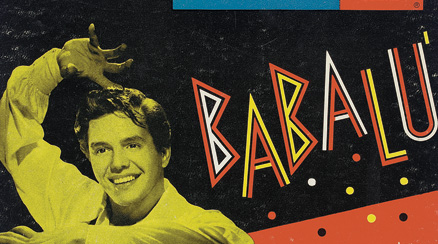 In Spanish the word “sabor” means “flavor” and is often used to describe good music. The traveling exhibition “American Sabor” explores the influence of Latino musicians in post-World War II America through the lens of major centers of Latino music production. Physical space limitations at the Center required the exhibit to be broken up into two pieces — a shame, but still manageable for the motivated viewer. The exhibition fills both the multi-use room and the gallery space.

The show’s thesis is that U.S. popular music (and culture) is a wonderful mix of influences — not the least of which is the influence of Latin music. The show uses audio, video, photography, art, and historical objects to convince viewers of the role of Latin culture in the U.S. The exhibit also celebrates the U.S. musical and cultural contributions of Americans with European and African ancestry and Native Americans.

You’ll see a treasure trove of period photographs, actual LPs, dozens of album covers, concert posters, and the labels from 45s — including a plethora of labels from Texas.  You’ll have the opportunity to hop onto the dance floor with Latin music you’ve chosen on a jukebox or be a little more discreet with jukeboxes outfitted with headphones.  There’s a small video theater set up in the gallery, too.

The stylish exhibits have well-written narrative in Spanish and English explaining the movements, flavors, and impact of Latino music on the U.S. music scene and popular culture.  San Antonio, L.A., San Francisco, Miami, New York, Cuba, and the Caribbean each brought a specific zest to the mix. Each locale’s style gave musicians the opportunity to become superstars.

The show also educates on more serious issues such as immigration and Chicano civil rights. A particularly thought-provoking exhibit panel shows a map of the 1848 Treaty of Guadalupe Hidalgo, which annexed Texas, California, Arizona, New Mexico, Nevada, Colorado, Utah and parts of Wyoming to the United States. Mexicans living in these territories became U.S. citizens overnight, yet their descendants still need to remind people, “We didn’t cross the border. The border crossed us.”

If you have listened to music at all since the 1950s, I’ll bet a trip to American Sabor will convince you that Latino music has played a part in the soundtrack of your life — even if you’re not aware of that as you walk in. Desi Arnaz, Xavier Cugat, Ritchie Valens, Celia Cruz, Joan Baez, Santana, Los Lobos, Linda Ronstadt, Gloria Estefan and Selena all get space.

The Center is maximizing the impact of the exhibit by staging an associated lecture series, music events, films, an accordion competition and a battle of the bands. Programming genius.