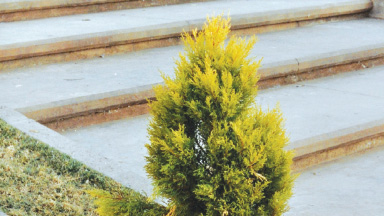 Looking at a distant hillside, we see the colors of the landscape fade to the palette of the sky. We know, of course, that should we travel there, we would not find shadowless blue dirt, shadowless blue trees. Those seemingly invisible particles of air in the emptiness between, we are told, add up and cast their own effect upon the image.

On first seeing Amy Blakemore’s new exhibition of photographs, the subjects and scenes likewise appear to exist in a faded distance — sharing not a specific color or palette, but a hazy sense of emptiness that has somehow cast its own pallor on the images. The photographs are not grand landscapes. For the most part, they show, one after another, arrangements of objects, the casually pushed about artifacts of everyday existence: flowers, knickknacks, patio furniture, storage tubs.

It isn’t until the viewer comes upon the only two images, “Missy” and “Sarah,” that contain living human figures that they realize how empty and abandoned the world of the other photos has been. The unifying effect of the collection ends up not being the honesty of the commonplace, as Blakemore appears to strive for by including these more or less typical candid portraits, but the understated psychological space of emptiness that they bring out through contrast, a space that serves a handful of the images better than others.

The most successful works do not accentuate or contradict their subject’s state of neglect but leave it muted; they use their detachment from the active world as a substitute for freedom, allowing the images to pretend at something more. “Pool,” for instance, depicting a black hose left haphazardly laid out in an empty concrete pool, does not ask its subject to be more than the static scene that it is, and yet the photograph delights in its mere desire for movement. The framing of the composition in “Steps” achieves a classical beauty, an effect which then gives way to the very simplicity of the scene itself: a small hedge, a strip of grass, wide concrete steps.

Though the individual pieces vary widely in their effectiveness, there is an imagination in several of pieces that arises outside of the subjects themselves, a sort of effect that adds up in the yawning of the emptiness, as the air does between a traveler and distant mountains, as dust does on objects left to themselves.