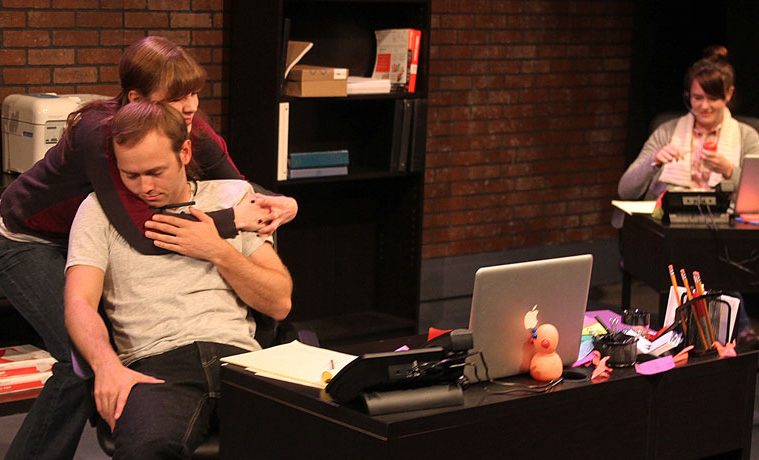 Black Lab Theatre’s production of the Leslye Headland’s play, Assistance is being billed as a Gen Y comedy, but with a slight change of phone technology I could easily see the work being set in the 80s world of Glengarry Glen Ross, or set during the 90s as the tech bubble burst on Gen X. The play about six assistants working for the president of a nameless corporation might highlight young twenty-somethings’ struggle to keep even the most soul-abusive job in a 21st century that’s not hiring, but the play ends up proving that some types of desperation are universal. 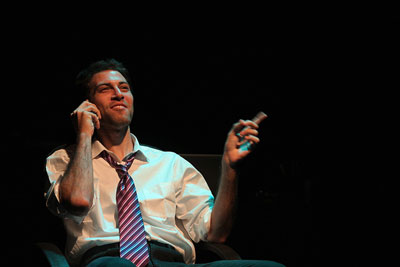 Assistance begins as junior assistant Nick, played by Adam Gibbs, exchanges insulting goodbyes with senior assistant Vince, played by Jordan Jaffe. The audience will never see their boss Daniel Weisinger, the company president, a tyrant who has finally promoted Vince to a higher position. Daniel needs four assistants to keep up with his petty and erratic demands.

The unwritten, but whispered, belief of the office is that if the senior assistant, the one who’s borne the abuses the longest, can train the juniors into competence, he can then move literally across the hall, and figuratively one rung up the ladder, into a managerial position. As Vince moves upward, Nick hopes to eventually train new girl Nora to replace him.

In perhaps a bit of theatrical irony, Jordan Jaffe also directed the play. His character, Vince, leaves early in the play, giving Nick little practical advice before abandoning him. Yet, with perhaps the exception of the last scene of the play, which goes on a few minutes too long, Jaffe directs a tight production, keeping the comedy and tragedy well-timed.

And this dark comedy does hold tragedy. Assistants come and go, as they are fired or quit in the middle of a nervous breakdown. Instead of a complex plot, playwright Headland seems more interested in character building-and-wrecking, as we watch each assistant survive or fail depending on his or her ability to emulate the boss, to stop being a person, and to become more like the monster on the other end of the line. 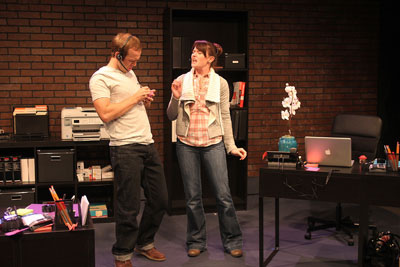 The real work and art of the play comes as the six actors create Daniel together, painting a portrait done solely with the aid of the one-sided phone conversation. Some of the cast are a little better at this than others, but Gibbs as Nick and Rebekah Stevens Gibbs as Nora are superb at building this character we will never see. Through their palpable sense of terror as soon as they see watch phone lines light up, to their cowering and groveling to an anonymous voice on the other end of a phone line, this offstage husband-and-wife team manage to make Daniel into a probable sociopath.

The other notable character is Emily Campion’s Jenny, the last addition to the assistant pool. Campion’s attempt at an English accent is a bit dodgy in some scenes but that might be intentional; Jenny comes off as a kind of Machiavellian Mary Poppins. She’s what Daniel really needs in an assistant, a nanny who recognizes the man as a corporate cult leader who might order his followers to commit figurative suicide at any moment.

The other assistants — Heather, played by Lindsay Ehrhardt, and Justin, played by Tim Ashby — might just follow that order. Each actor gets a monologue scene to illustrate their character’s blindness to how willingly they have warped themselves to adhere to Daniel’s domination. Jenny does see and the question the audience is left with is whether her foreknowledge and chirpy–but –iron–armored soul will save her until she, too, can climb one rung out of there.