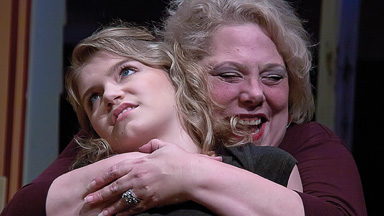 August: Osage County, Tracy Letts’ powerful, punishing, acerbic comedy on the internal collapse of Western Civilization, received a formidable, well articulated production at the hands of Rene’ Moreno, directing at Water Tower Theatre. Pam Dougherty (as matriarch Violet Weston) leads a well-orchestrated, thirteen-member ensemble through a three hour joyride of frantic, grotesque, destructive, hysterical, rambunctious melodrama. The Westons are a white bourgeoisie clan with a Native American housekeeper, temporarily inhabiting a large house outside Pawhuska, Oklahoma. They have gathered for the funeral of patriarch Beverly Weston, a somewhat celebrated, alcoholic poet. At the opening of August, we see him interviewing Johnna, the previously mentioned domestic. He explains that he and Violet have an “arrangement” (meaning they must abuse substances to endure one another) just before he disappears. Like many tumultuous romances, apparently Beverly and Violet get along better in different rooms.

It seems pretty clear that the character of Johnna has been placed in August, for the sake of contrast. Violet, in a typical moment of nasty “truthfulness” points out that Johnna’s getting paid, when someone thanks her for cooking the meal. As if remuneration precludes appreciation. Johnna remains tranquil and resourceful even as family members try to navigate the chaos of their dysfunctional lives. Violet treats her as interloper, despite the fact that she undeniably makes things easier for all of them, and stays out of the way. When Letts raises issues like the cultural differences between Indians and Anglos, the debatable ethics of acquisition by conquest, the consumption of meat and the use of hallucinogenics, well, comparisons seem inevitable. She may not have a lot to say or more than one room to call her own, but Johnna is obviously more evolved than any of them. In a moment of crisis it is she that Violet seeks out.

You have to admire the way Letts has depicted the Westons, blameless and yet somehow tainted and pathetic. Lost and unstable, yet normal. Violet and her sister, Mattie Fae (and her husband and son) three grown daughters : one with a daughter and estranged husband, another with a fiancé, another single. Each one has their issues (as all of us do) but for some reason, when they’re all under one roof, eruptions flood like Krakatoa. Violet is addicted to prescription pills, teenaged granddaughter Jean smokes pot, Ivy Weston has fallen in love with first cousin, Little Charles. It’s not exactly like those lofty dynasties in the Greek tragedies, where crimes that would make the Manson family cringe, bring curses from Mount Olympus. But we do get the impression Letts is asking us to take a step or two back, and a long, sharp look at the failure of our culture to even gravitate towards spiritual enlightenment.