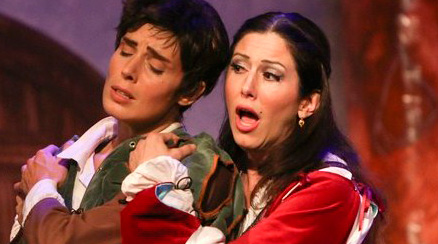 Camille Zamora as Juliet and Sarah Heltzel as Romeo.
I Capuleti e i Montechhi
Opera in the Heights. Photo by Kinjo Yonemoto.

Opera in the Heights

Is love only sweet when it’s forbidden? In the Opera in the Heights (a.k.a. Oh!) production of Vincenzo Bellini’s I Capuleti e i Montecchi, view there is no aphrodisiac like danger for the young lovers, Romeo and Giulietta.

Loosely based on Shakespeare’s Romeo and Juliet, Bellini’s opera casts Romeo as a mezzo-soprano and, intentionally or not, ironically alludes to Shakespeare’s traditionally all-male cast (in which Giulietta would likely have been played by a young man). The two lead women are entirely surrounded by men, aside from two other women in the chorus that act as nuns or maidservants; this makes for some unusual vocal pairings in the ensemble numbers.

The score, which features several orchestral interludes, served to highlight the burgeoning skill of the orchestra. Artistic Director and Conductor Enrique Carreón-Robledo was reliably excellent and one with the score.

This production is the second Houston premiere of Oh!’s 2012-2013 season, and for all performers (both “Ruby” and “Emerald” casts), their parts are role debuts. Singing the part of Giulietta (in the “Ruby” cast) is Houston native Camille Zamora; the sweet timbre of her voice is easy to fall for apart from some pitch issues in the first act. Sarah Heltzel, singing the part of Romeo, showed impressive control of the part’s comprehensive range. While her vibrato was jarringly wide at times, her passion was unrivalled.

Does love really conquer all? As Giulietta cries “You owe it to me, too, to sacrifice your heart!,” it seems for these two lovers, this is only true in death.