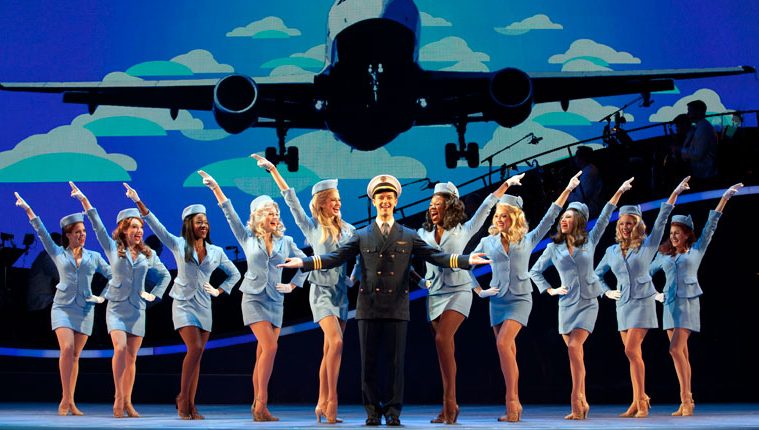 Review: Catch Me If You Can

What’s not to love about a FBI song and dance man? Catch Me If You Can rolled into the Hobby Center with enough earnest energy that people might think it’s a noble thing to forge a check. The advantage about making a musical based on a film, is that most of us already know the story. The musical does make more of the father/son relationship, giving the show a touch of depth, but not too much to drag the pace down. Because we are familiar with this material the creative team is really free to just have some fun.

And what a team it is. With a book by four-time Tony winner Terrence McNally, a score by Tony winners Marc Shaiman and Scott Wittman, direction by the legendary Jack O’Brien and choreography by Jerry Mitchell, it’s a regular Broadway mastermind club.

Packaging this wild romp about a check forger and identity thief as a “show” came in handy. It’s like an episode of The Lawrence Welk Show with a generous amount of space allotted to the fabulous onstage big band. Every show needs a charismatic leader, and they have found one in both the character of Frank Abagnale Jr. and Stephen Anthony, the actor who plays the young, clever and downright loveable crook. Anthony reminds us just enough of Leonardo DeCaprio to tickle our movie memories, but not enough to take away from his many talents. His sparkling tenor, smooth dancing, and innocent charm make the role come alive. We end up cheering for an adorable criminal. That’s some Broadway magic.

Merritt David Janes is equally endearing as the sympathetic FBI Agent Carl Hanratty, while Dominic Fortuna as Frank Abagnale Sr., and Caitlin Maloney as Paula, serve as the mom and pop emotional anchors. The elegant Maloney shines in “Don’t be a Stranger.”

When Mitchell told me he was working on a musical version of Catch Me if You Can, images of high-kicking flight attendants danced in my head. His too, so it seems. Mitchell, the hot shot choreographer of Hairspray and Legally Blonde (which he also directed), knows how to move a show at a lightening clip. From scantily clad nurses to those sexy 60s Pam Am old school stewardess, Mitchell managed to utilize every inch of the narrow strip of stage space not taken up by the band.

Outside of “Don’t be a Stranger” and “Live in Living Color”, most of the songs are unmemorable. Still, Catch Me if You Can contains enough pizazz in terms its dazzling choreography and strong performances to make it worth catching.