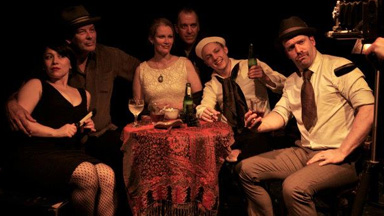 CICERONE, sick a truly original and unique journey into the 1930’s Art scene in Paris, ask written and directed by Matthew Posey.

There’s something unmistakably engaging and tantalizing about the story of Henry Miller, expatriated writer who came to Paris in the 1930s, colluded with Anais Nin, professionally and sexually, and went on to publish novels so laced with tempestuous, torrid eroticism that they shook the world off its axis. For many years after their release, Tropic of Cancer (1934) Black Spring (1936) and Tropic of Capricorn were banned in the United States, so any copies found there had to smuggled. The Ochre House’s most recent offering: Cicerone, describes Miller’s time in Paris, his connection to Hugo Guiler and Hugo’s wife, Anais, and the complications that arise when Henry’s estranged wife, June, returns to attempt some kind of reconciliation.

Written and directed by Matthew Posey, Cicerone moves at a relaxed pace, opening with Miller, explaining in retrospect (while flirting and cajoling with his current paramour) his most artistically fecund days in France. Miller is sly, intelligent, blue-collar, charming and casually salacious. What makes him so appealing is what also makes him so infuriating. His rapacious carnal appetites and need to document them in lurid detail, made his prose compelling and alluring. He is also doggedly devoted to the truth, which is probably what redeems him from being a hopeless profligate. He’s intrepid enough to sleep with his best friend Hugo’s wife, but grounded enough to feel remorse for the betrayal. When June begins an affair with Anais, Henry is none too happy, but how can he impose boundaries he has flouted himself?

At the center of Cicerone (towards the end of the first act) is a scene where key characters gather at a night club called Le Chat. It’s the fabled den of iniquity (with lots of promiscuous, cavalier coupling) and a metaphor for the impulsive behavior that seemed to be in vogue at the time. What makes Henry Miller the perfect navigator for this climate of disillusionment, nihilism and abandon, is his grubby, solipsistic, grudgingly humane worldview. He’s not hostile, or greedy. He’s perfectly okay with non-possessive sex till he’s excluded, then it all gets messy. And those are the situations that create drama. Matthew Posey’s production of Cicerone could perhaps use a bit more urgency, and distillation. It might not hurt to include some actual passages from Miller’s prose, just to give us a taste of his feverish mind at work. But it is a rich, vivid canvas, capturing the lives of intriguing historical figures (Nin, was, of course, an astonishing literary eroticist in her own right) with acerbic, introspective, strangely compassionate wit. Posey takes the life of a genius and makes him accessible, comprehensible, authentic.