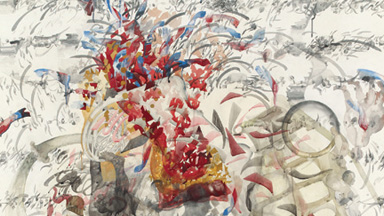 Considering the fact that the Asia Society Texas Center has been active in Houston for over three decades, one might think that by finally gaining a permanent home in the museum district would be a cementing of the old rather than the beginning of something new. But, with the opening of the Yoshio Taniguchi-designed building last month, the Center has already shown itself ready to dive headlong into redefining itself as not just a facilitator of events, but as a steady source of thoughtful art exhibitions.

In curating the inaugural show spanning the building’s first floor, Rice Gallery’s Kim Davenport has done an impressive job of balancing the need of representing the vast scope of the Asia Society’s swath of the globe against the risk of essentializing the variety of cultures or, alternately, being too myopic. The iconography that constitutes most westerners’ impressions of Asian culture such as; crowded street markets, noodles and chopsticks, anime characters, serene landscape painting, porcelain tea services, and calligraphy is present throughout, but the artists work with these tropes as if they constituted merely another material or medium from which to create.

To wit: Huang Yan’s Chinese Shang Shui Tattoo No. 6-2 Series is a photograph in which a snowy mountain landscape has been painted upon the torso of a man; Shao Fan’s project no. 1 of 2004 chair deconstructs, literally, a Ming Dynasty-style chair, suspending each piece in clear acrylic; and Vietnam’s Dinh Q. Le’s Untitled (SPAM), a woven photograph created using traditional technique uses images of war and western product packaging as its source material.

Shahzia Sikander, Pakistan-born and one-time Glassell Core Fellow, offers the most strikingly organic synthesis of traditional and contemporary with her large-scale piece Hohlraum.  Like a manuscript page, it features neat lines of calligraphy illuminated by delicate gouache doodles, creating a charming haze amidst which other images emerge.  Most significantly, a hand grenade. Japan’s Yayoi Kusama’s two contributions, the painting Nets Obsession TTS and the sculpture Untitled, are more cryptically abstract, but delight just as much and extend the aesthetic realm of this small, but exquisitely organized show.

With the grace of a legerdemain trick, Davenport has given the visitor a rewardingly deep experience while making them feel that they have merely dipped their toe into what the Asia Society will be able to offer with their new gallery space.