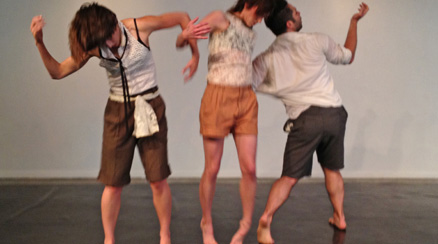 Critics get only so many chances to use the “you should have been there” card, but really, when it comes to Lydia Hance’s Context, recently performed by Frame Dance Productions at Winter Street Studios, this is one of them.

Billed as an “event” rather than a show, Context has roots in Fluxus, happenings, performance art, site-specific art, and all that sprang from artists who just got restless with the confines of a black box theater.

Performing in galleries is nothing new. That said, just about everything in Context has a freshness, from the way one was greeted to its conclusion, where the dancers bolt off stage as if called to another engagement. Hance, an energetic presence on the dance scene, galvanizes the city’s best talents to put on her out-of -the-black-box events.

The piece sprawls out in space and time. Context begins before you even know it, when you happen to catch a performer standing amidst the photographs by Sil Azevedo and Lorie Garcia. Realizing that audiences prefer a little direction, Hance also included a guide to Context, in case you wanted a plan. The idea is that the audience orchestrates their own experience, either by interacting with the performers, making way for them, or taking a more passive approach by simply following them around.

For the most part, the crowd was a game tribe, getting more daring as the piece progressed. A few bold folks merged with the dancers, creating a more seamless experience between performer and watcher. It was in these moments that the “framing,” essential to Frame Dance’s mission, actually occurred.

With a strip of marley in the interior section of the gallery, we did get the idea that at some time there would be more or less a dance concert. And sure enough, there was.

Kristen Frankiewicz partnered with a wall in a witty solo. “Come on, dance with me,” she seemed to be saying,” without much success, but with admirable perseverance. Frankiewicz continues her rise as one of the most compelling movers on the Houston dance front. Her clarity never compromises her characteristic sensuality. Finally, she was relieved of her pas de wall by Alex Soares’ sassy invitation to waltz.

Unison ensemble sections organized themselves out of thin air, creating surprising passages of emergent structure in an otherwise loosely organized movement vocabulary. As casual as the setting was, the performers were anything but. Intense and undistractable, Frankiewicz, Soares, Jacquelyne Jay Boe, Ashley Horn and Brit Wallis carried on with unflinching dedication, even if their mothers were on their paths. Charles Halka’s dynamic music added to the drama of the proceedings. Apparently, putting dance into “context” is serious business. But really, you should have been there.