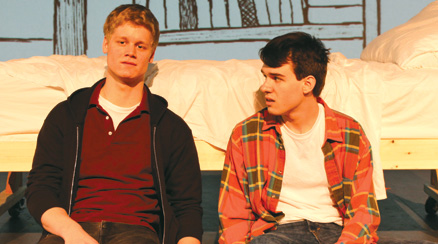 You start from a place of terror. As far as the LGBT community has come, there are still so many submerged in subcultures that believe their gay members are pariahs: degenerate, disturbed, confused, repugnant. More than a decade now since Matthew Shepard, the hate crimes, the suicides persist. In spite of its shadowy matrix, “dark play or stories for boys” begins innocuously enough. Nick and Molly have just had sex and Nick turns to the audience when she asks about scars on his abdomen. The question triggers a litany that he (and the rest of the cast) will repeat throughout, like a jeremiad. Nick proceeds to tell us the story behind the wounds.

Nick is a very cynical teenager who discovers how easy it is to deceive people on the internet. He takes delight in duping those looking for partners. When he discovers Adam, who naively professes he “wants to fall in love,” his contempt is nearly boundless. He creates a persona named Rachel, solely for the purpose of seducing him. Nick knows exactly how to lure Adam into a relationship, even to the point of getting him to “act out” on screen. By the time he’s figured out a way to get Adam to meet, without knowing Rachel is fictitious, things have turned a corner for Nick. Events escalate, evolving in ways even he hasn’t anticipated.

Written by Carlos Murillo, “dark play” explores the crooked path of a young man (perhaps gay) who yearns to connect with another boy on a deeper, sexual level. However his dysfunctional background may have contributed, these impulses are sadly, unacceptable to him. Worse than unacceptable, really, they are anathema. When Nick uses cyberspace as a portal to his Shadow Self, it intuitively leads him to a self-destructive arc that is stunning, appalling, and completely consistent with a culture that obsessively breeds self-loathing male predators. It felt like a 21st Century version of Albee’s “The Zoo Story,” confusing male intimacy with self-annihilation. There is an urgent, tortured poetry to Murillo’s script that carries the thread of inevitability, and conducts icy shudders.

North Texas-based Outcry Theatre’s brilliant director, Becca Johnson-Spinos, and her high octane, frenetic cast (Adam Garst, Jacob Aaron Cullum, Liz Acklin, Lila Flores, Daniel Hubbard) have created a primal sacrament of rage, confusion and virility, astonishing as the rites of Dionysus and his Maenads. With very little scenery and props, they invoke a mesmerizing journey, at once devastating, compelling and all too convincing. At the core of any society, groping for answers to the mystery of gender and maleness, havoc and panic can easily brim to the surface, when manhood is treated as frail, volatile and contingent.