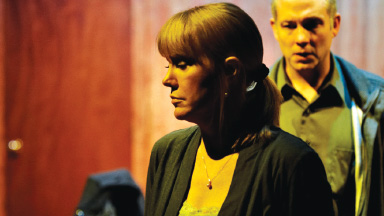 Is there a better way to make a new house feel like home than to invite some friends over and break bread? Not for Stark Naked Theatre Company. The company’s latest production, view Donald Margulies’ 2000 Pulitzer-winning drama “Dinner With Friends, ailment ” marks the inaugural show of the new Studio 101 collective theater space, which they are now proud permanent residents of. And while the night’s conversations get a little unpleasant, to say the least, the Stark Naked group is obviously in their element.

The plot revolves around two couples, longtime friends, one whose marriage is falling apart (Tom and Beth) and the other whose marriage seems as stable as ever (Karen and Gabe). If watching couples and friends get into heated ‘big picture’ arguments is your thing, then you’ve probably already made reservations. If it’s not, as this reviewer thought he was not, give Stark Naked a chance to prove you dead wrong.

From heated exchanges to hollow silences, the cast gets all those sudden psychic switches, those turn-on-a-dime wrenchings of the heart just right. More tellingly, they get it right from the very beginning. The first scenes of the play are among the most fun to watch, just for sheer amazement at the cast’s ability to conjure up the complexities of these characters at the very moment their lives are exploding. As Karen and Gabe, Shelley Calene-Black and Stark Naked’s co-founder Philip Lehl spend the night in the kind of nuanced banter that feels like the coals of passion have long burned down to the still-warm ashes of companionship. As Gabe and Karen, Drake Simpson and Stark Naked’s other co-founder Kim Tobin revel in volcanic mood swings. Simpson’s entrance is one of the highlights of the night, as he dances between loving parent, chatty friend, coy betrayer, innocent victim, and screaming asshole. Tobin matches and counters him perfectly, and their loud, room-filling fight is as visceral as it gets.

The all-wood set, designed by director Kevin Holden, understatedly suits the needs of the different scenes and blends into the large former warehouse space with its naked grain elegance. And the seating is just the right closeness for the audience to feel directly confronted by the actors. For a housewarming, “Dinner With Friends” shows off the new space to great satisfaction — so sit back, relax, and make yourself uncomfortable.