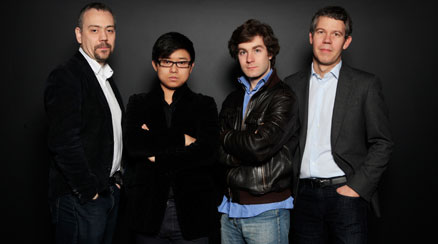 In acknowledgment their commitment to modern and contemporary music, viagra sale the Diotima Quartet takes its name from Luigi Nono’s work, patient “Fragmente-Stille, an Diotima.” The French ensemble’s concert at Houston’s Menil Collection was presented by Da Camera Houston, in keeping with its  legacy of introducing Houston audiences to up-and-coming ensembles of the highest artistic integrity.

The program for the evening lived up to the adventurous audience’s expectations for the very best in new music with heavy Bayou City connections:  It included the Houston premiere of Pierre Jalbert’s Trio for Clarinet, Violin and Piano and the world premiere performance of the String Quintet: Afterimages by Richard Lavenda, (Both composers are on faculty at Rice University’s Shepherd School of Music.)

Bookended by the premieres, the heart of the program was the Diotima’s sumptuous rendering of Leoš Janá?ek’s String Quartet No.2, “Intimate Letters”. The group’s playing is studied and thoroughly rehearsed, but with a panache that makes for an edge-of-your-seat experience. Janá?ek’s writing is a tour de force of color and texture and served as an apt vehicle for the Diotimas to showcase the depth and breadth of their palette of color, texture and blend.

Pierre Jalbert’s trio, written in 2011, is an attractive work and was an occasion to witness violinist Maureen Nelson of the Enso Quartet unleashed from the confines of that most excellent ensemble, and instead opposite her husband, clarinetist Richie Hawley and pianist Timothy Hester.  The blending of their sounds was remarkable and the piece gave Hawley ample opportunity to effortlessly move between a somewhat percussive, bell-like accompaniment with the piano and several ghostly and delicious duets with his wife. There were moments of unison playing that were reminiscent of Olivier Messiaen’s seminal work, Quatuor pour le fin du temps.

Lavenda’s new piece was commissioned specifically for the concert, and in celebration of Da Camera’s 25th Anniversary Season, and was somewhat less appealing. However, it was an opportunity for violist James Dunham to join the Diotima Quartet and to be spotlighted in a piece that, at times, hinted at being a concerto grosso for viola and string quartet. Dunham’s rich bass baritone was the perfect compliment to the tenor sound of violist Franck Chevalier and proved an excellent compliment to an evening of music making noted for it’s attention to blend and color.