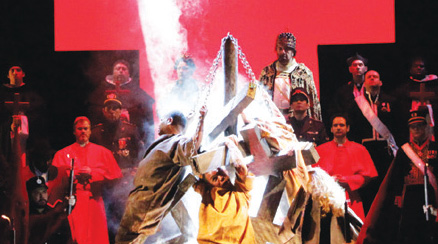 What does a choir of red crosses, ed pyrotechnics, find and a wooden cart carrying chained heretics make? In Houston Grand Opera’s version of Giuseppe Verdi’s Don Carlos, it’s the turning point from a mediocre opera to a memorable one.

Don Carlos is the second-to-last opera of HGO’s 2011-2012 season, with just Gaetano Donizetti’s Mary Stuart to come. It will be difficult for Mary Stuart to outdo this production, directed by John Caird, if not simply because of the music. Under the baton of conductor Patrick Summers, the uncharacteristically dense score Verdi composed takes on vibrant life. Uniquely expressive, Summers’s fingers seem to paint the sublime Wagner-like chromatic lines and harmonic changes for which Verdi suffered criticism.

The first two acts of HGO’s production should have stayed in the practice room warming up–the costumes and set were underwhelming, and the early start (the opera began an hour earlier than usual) seemed to catch some singers’ voices off guard.  But, Act Three was stunning, and by the time Don Carlos died, all lost track of the world outside of the Spanish Inquisition. Tamara Wilson, playing Elisabeth de Valois, conveyed the purity and beauty of her tragic character epically with her voice, showing uncanny breath control in sensational high notes in the final two acts. Brandon Jovanovich, making his role debut at HGO as Don Carlos, dazzled all with his commanding tenor voice, and the virtuosic arpeggios and trills Verdi is famous for seemed remarkably effortless for Christine Goerke, who sung the part of Princess Eboli.

From a mess of prom dresses, Godfather-like mob suits, and what looked sometimes to be high school bleachers, the set and costume design by Johan Engels and Carl Friedrich Oberle respectively blossomed once the Inquisition took control. Indeed, it was when heretics went up in flame that one was suddenly awestruck by an august conglomeration of sound and sight.  As the black backdrop transformed into a piercingly red cross, the totalizing effect became complete.

Don Carlos is more rarely performed in the full five-act French version. Competing with several other versions of different lengths including the more often heard Italian text the French version that HGO performs is worth the extra hour or so. After this performance, it’s suddenly terrifically hard to rise out of one’s seat and exit into the blind light of twenty-first-century reality. It is opera in its element.