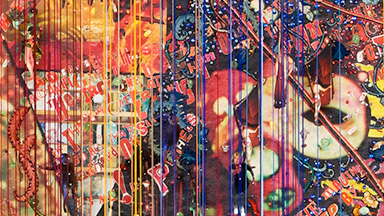 While ancient Greek texts are being jettisoned for “economically viable” collegiate fare, they still offer trenchant material for artists. “Elliot Hundley: The Bacchae” at the Nasher Sculpture Center is a case in point. It’s a glammed-up hybrid of layered and complex visual texts that conceal and reveal in equal measure. In the traditional dichotomy of Apollonian versus Dionysian mythologies, Hundley opts to show us riot rather than rigor. He gives us the wild post-party dance rather than the seated dinner party. It’s energetic; it’s complicated; and it’s terrific.

As almost any veteran of college classes treating Greek plays will recall, a dichotomy of Apollonian order and rationality is typically thrown into relief with stories of wild debauchery and Dionysian (Bacchanalian) revelry. Euripides examined the twists and bloody turns of madness and lopping off of heads as well as any poet in the Greek pantheon. In fact, his work is still such compelling stuff that it continues to emerge in new and unsettling ways. Thus, the work of Hundley is pinned and hinged, cantilevered and torqued in ways that grant us ingress into this ancient text via new and interesting means. If we’re worth our salt, we’ll find it impossible to look away. In fact, we’ll want to see more, know more, evolve more.

Hundley’s “swarming over” is simultaneously elegantly wispy, layered and riotous. It constellates our gaze such that we see through it and with it. It’s a tangle of apertures so engaging that it seems perfectly reasonable to leave dullish, Apollonian stuff behind. This new world is literally bent and hanging and we couldn’t wish for more. Hundley’s “eyes that run like leaping fire” is a long walk in the hot sand of deciding how we opt to see things. Figures and grounds merge and create a cacophony of past-present; verb-noun; text-image. In fact, we’re furnished a kind of curtain through which we view details of a riotous landscape. In other works, we’re given circular apertures that are either clear or brilliant blue. In both cases, they expand the work. They’re windows we utilize to closely witness a world wildly dismembered, then reassembled and remade. We’re lured into examining how we curate our thoughts and how we view and remember the world. “What more could we ask for?”

In fact, I wonder if Hundley paused on the seventh day and looked out over his spectacle of pins, images, typography and thread-like curtains and thought, “This is good.” It’s really good. He does with collage what Cormac McCarthy does with Olivetti typewriters. Hundley’s work outstrips our wildest expectations when we enter the doors of those august institutions we call museums. It’s all too rare that we, indeed, get to muse. Here’s your sparkly, white-hot chance.