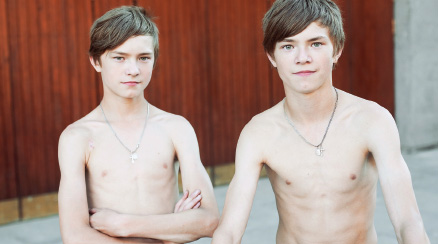 There was a chasm, according to the curatorial statement, a trench clawed into the cultural memory that separates the young Russian artists, who started making work in the last decade, from any sense of national continuity. The 22 artists that are represented in FotoFest’s “The Young Generation” did not have the advantage of a national infrastructure or even access to most of the photographic works from previous generations. No structure, no dialogue.

Some of these artists had the benefit of a mentor, some traveled, others came from journalism, and the rest are autodidacts. The curators have dubbed them “the internet generation,” but the photographs at Vine Street do not reference New Aesthetic: no pixels, artifacts, colliding infostreams, or multiplatform assaults. And yet, there is evidence of Etewaf mining, deep echoes from the entire history of photographic production. These works harmonize Josef Sudek, and Daido Moriyama, and Emmett Gowin, and Wolfgang Tillmans, and André Kertész, and so many more. Echoes from beyond the medium like Kir Esadov’s murky images of cackling death, too brutal for Metal; or Vasilia Nezabarom whose sense of play feels a serious as Dada; or Daria Tuminas whose folk tale images are equal parts Gondry, Saint-Exupéry and Amarcord.

The most surprising aspect of this smorgasbord of influences and references is that it’s pierced through with such a consistent tone, hard to define, almost ineffable, but very precise; this exhibition’s approach is not historical or even anthropological, this show is a mixtape.

There is much talk of poetry in the various texts that cling to these images, but poetry is perhaps the wrong analogy. Most of these works share a fragility and an openness that is closer to pop music. And the transitions from one body of photograph to the next make sense in the way that tone is picked up and complicated or turned around from artist to artist. It’s difficult to walk out of this show with a solid idea of the factual lives of young Russians, but one is left with a very real understanding of what it feels like, for some, to exist in this time, in that place.

Much of the work even approaches musicality in its very construction. Petr Rakhmanov, Alexandra Demenkovia, Dina Shchedrinskaya, Nikita Pirogov and Alexandra Stukkey all present groups of images that are meant to be read as single units rather than series. This allows for rhythmic play, fugue-like constructions, modulations of visual ideas, surprising transitions, and subtle changes in temporal perception. For the most part, this is the work that is most affective. When the music is strong enough, we don’t need to recognize the places or the names; we know what the song is for.

— SEBASTIEN BONCY
Sebastien Boncy is an artist and educator living in Houston.