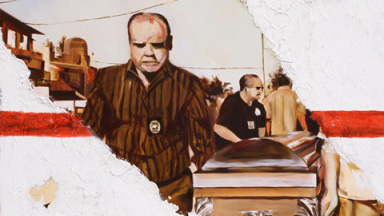 Terrible things are still happening in Mexico. Your preferred news organizations may not cover it anymore and you may not think of it often, but the drug cartel violence continues to claim the lives of our neighbors to the south. Gerardo R. exposes scenes of this violence with his exhibition Un Día a La Vez at Start Gallery Dallas in Oak Cliff.

Gerardo’s paintings and drawings are based on press photographs from news sites that still cover the continuing violence. Images of conflict and grief fill the walls of Un Día a La Vez. Bloodied figures are held at gunpoint by police, and women weep over the newly dead bodies of their loved ones. These works are emotionally charged and gritty in both subject and technique.

The boldness of Gerardo’s works are tempered in part by his use of stucco and gesso to partially obscure the images. Nearly all of the works within Un Día a La Vez have been whitewashed to block or guide the viewer’s focus. The painting “Agresión” depicts two men being led off by the Mexican police. The faces of these men are bloody and covered by their white shirts, while the faces of the police are covered by a layer of rough white stucco. The viewer is not permitted to see the complete scene. This stucco or gesso “wall” may be a visual representation of a perceived barrier to our true understanding of the situation as it exists in Mexico.

The imagery in Un Día a La Vez sometimes becomes heavy-handed and overly illustrative. In the work “Perceptions” a woman grieves over a bleeding body. Her somber form floats near the almost comical drawings of an ear of corn, a margarita, a chile pepper, and an Aztec temple. This comment on the American perception of Mexico is anything but subtle and greatly diminishes the emotional power of the work.

In our own minds we may have forgotten or unintentionally whitewashed the dire situation in Mexico. Gerardo’s paintings once again reveal the conflict, as well as the moral difficulties that lie at the core of the Mexican war on drugs. Apart from the mourners, it is hard to find sympathetic characters in these works. The police appear brutal, the cartel appears brutalized, and the onlookers appear terrorized. Gerardo has brought new life to these painful images of war, and in a small way new life to this complicated and heartbreaking situation.