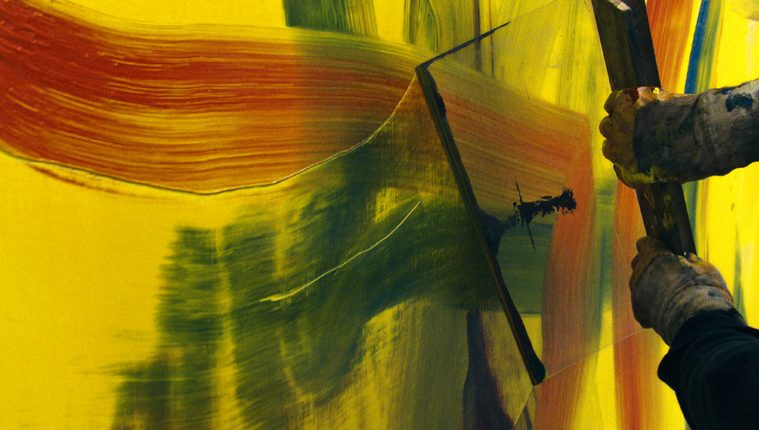 Paint and the moving image have a complicated relationship. Early cinema influenced how Pablo Picasso and Georges Braque saw the world, helping to usher in cubism, as shown in the 2008 film Picasso and Braque Go to the Movies. And a film or video camera’s zooms and pans can change how we look at paintings, bringing details to life we might otherwise miss.

But the camera can play a misleading, even potentially destructive, role.  Willem de Kooning, whose whiplash lines and sweeping gestures defined “action painting” in the popular imagination nearly as much as Jackson Pollock’s drips, is said to have painted in a frenzy for a rolling camera, only to scrape it all out when the filming stopped because the reality of how he worked – painting a stroke, then staring at it for a few hours – seemed too dull to film. Pollock relapsed into alcoholism moments after Hans Namuth’s camera stopped rolling; six years later, he and a passenger died in a drunk- driving accident.

Perhaps Gerhard Richter has these cautionary precedents in mind as he complains to filmmaker Corinna Belz that painting under observation is “the worst thing there is,” worse than going to the hospital.

“Painting is a secretive business anyway,” he says, looking like he could use some alone time.

Making its Bayou City premiere in June at the Museum of Fine Arts, Houston’s Brown Auditorium Theater, Gerhard Richter Painting balances action-painting thrills with the actual painter’s angst while helping viewers see his work in new ways. Belz knows just when to give us, if not hours between brush strokes, enough anxious minutes to telegraph the thought and feeling that go into each decision.

At 79, Richter puts body, mind and soul into the large abstract paintings he’s creating for the camera. The sheer physicality that goes into them is staggering and feeds into the film’s psychological drama.

Working with a large brush, Richter quickly covers a blank canvas in mostly discrete areas of yellow, blue and red. It looks like a garish, amateurish mess – like any art student’s de Kooning knockoff – when he says he’ll leave it awhile and begins work on a second canvas. But no sooner has he laid down an expanse of yellow paint than he veers back to the first canvas and starts violating each color’s territory by dragging the same brush through each area, yielding new linear, ribbon-like passages of muted colors.

After brushing more paint onto both canvases, Richter picks up a large squeegee and starts scraping it across both compositions, complicating their spaces and creating new blurry forms. But as he steps back, he’s not satisfied, saying he needs to find a way make them better while keeping their fast, fancy-free feeling. As they are now, he says, they won’t hold up. They’ll look good for two hours, maybe a day if he’s lucky.

As the paintings progress, with occasional breaks in the action as Richter meets with gallerists and haggles with a museum curator over how to light an upcoming exhibition, the squeegees get bigger, large enough to cover the width of the canvas as he drags them down across the entire length. They shift back and forth between becoming more and less resolved. As he surveys their mottled surfaces, which contain multiple colors but are dominated by yellow, Richter loads up a squeegee with blue paint, only to declare the idea an overblown one that would destroy the paintings.

Eventually, we see the completed paintings at a gallery opening that seems to go well, then Belz gives viewers the climax they’ve been waiting for: a montage of Richter tackling a canvas from start to finish with the deliberations edited out.

Richter attacks a huge green painting with one sweeping, decisive gesture after another, first squeegeeing paint across the surface, than selectively scraping it off to reveal the reds, yellows, blues and whites underneath. After he makes a few adjustments, he slowly drags huge squeegees fully loaded with white paint across the canvas – first vertically, then horizontally – a process that grows slower and increasingly laborious as the layers accumulate.

Finally as the camera pans the studio walls, filled with what may or may not be finished canvases – they are now an icy pale greenish-gray – he laughs, sounding happier than he has at any moment in the film, and says, “Man, this is fun.”

It’s fun for us too. And for Houston painters, it should be required viewing.