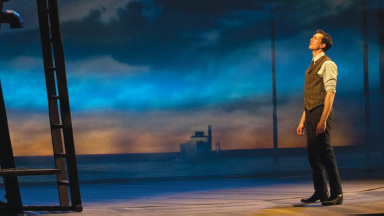 There’s an opportunity waiting for you, mythically in Texas and specifically in Dallas at the Wyly Theatre. It’s “Giant” and it’s giant.

This co-production between New York’s Public Theater and the Dallas Theater Center sets out to stage the story that graced the screen and, for many, defined the state. Though the movie’s shadow stretches from Marfa to the Metroplex, Michael John LaChiusa’s music and lyrics along with Sybille Pearson’s book stand tall. This is not the movie but it’s just as big.

Years in the making, this is the unveiling of the latest incarnation and you have the opportunity to say you saw it when. Texas is the main character, mentioned 90 times in the script. Like some maniacal host of a dinner party turned murder mystery, the state is constantly though inconsistently described from beneficent and beloved to demanding and dangerous depending on the point the character wants to make. It’s a combination oil puddle cow-patty inkblot. Unfortunately, the exuberance our hometown has for its home is not equaled elsewhere and may spell trouble when it travels outside our borders.

The set designed by Allen Moyer is dominated by a toe-stubbing mistake of an image: a railroad water tower taking up a third of the stage. Though it rolls on and off, it remains omnipresent as a missed opportunity for metaphor. Windmills and oil derricks share similar form due to a similar function: to bring liquid from the land. Oil derrick silhouettes appear later in the play but achieve no resonance other than exuberant domination. The rest of the set is a sky-floating orchestra hidden and revealed by a cloud-painted scrim and a grand staircase that rolls on opposite the water tower.

Localities are suggested by furniture carried on or gently swung forward and back by a turntable. A set so sparse requires costumes to help us move us through time and place. From indoors to out, poverty to excess, across social divisions and occasions flashy to dour, costume designer Jeff Mahshie steps up to the task. Lighting designer Kenneth Posner deserves special recognition for being able to light characters under a floating orchestra.

The show opens with a simple song, “Aurelia Dolores,” superbly sung by Raul Aranas. What begins as a serenade builds into a full company anthem. Director Michael Greif knows how to set you solidly in your seat. We are at the welcome home barbecue for a newly married couple. Ranch owner Bick Benedict (Aaron Lazar) has impetuously married Virginia native Leslie Lynnton (Kate Baldwin) and brought her to Texas.

For fans of the film, Lazar is not rock Hudson and Baldwin is not Elizabeth Taylor. Surprisingly, it doesn’t matter.

In his first number, Lazar’s rich voice conveys Benedict’s strident love for his land. Baldwin’s Leslie is more energetic than Taylor. Her playful infatuation develops into active fascination in her first number. It’s as if these two knew that right at the start they’d have to win their role from the movie stars in the imagination of every audience member. The same cannot be said for PJ Griffith’s Jett Rink. James Dean’s quirky performance as the black sheep ranch hand would have remained iconic regardless of his untimely death just weeks after shooting his scenes. Rink carries a grudge against Bick and a candle for Leslie the moment he meets her. He bucks authority and challenges his station as a lowly worker. With a swish in his anachronistic rock and roll swagger, Griffith creates a rink devoid of the self-doubt dean made famous.