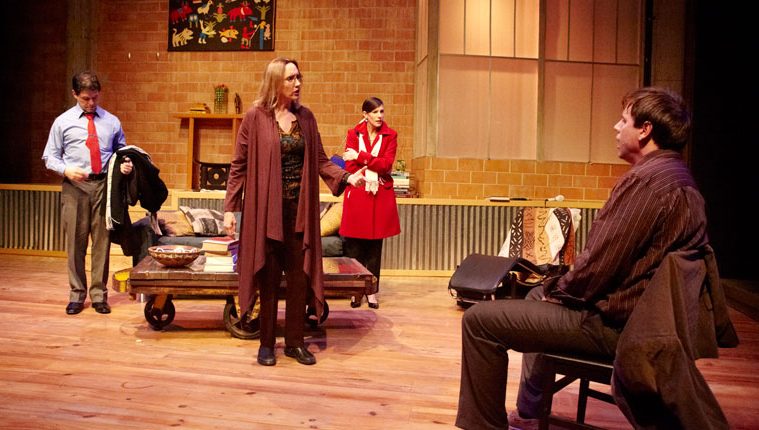 I’ll admit: my first reaction to the news that Stark Naked Theatre Company had inserted French playwright Yasmina Reza’s God of Carnage into its current season between Body Awareness and Macbeth was, “Oh no, not that thing again!”

It was only a year ago that I caught the award-winning, much-ballyhooed play in Houston at the Alley, and it’s best to say I was not impressed. The four actors in the show were fine, coming in from out of town in one of those resource-swapping arrangements you see more and more these days. And while Reza’s script is witty enough, that’s about as far as it went. In another sign of the times, it also seemed to be vulgar, well, just for the hell of it. I walked out of the Alley that night with no desire to see God of Carnage again – even if the original Broadway cast of James Gandolfini, Jeff Daniels, Marcia Gay Hardin and Hope Davis might have made me reconsider.

Those Hollywood stars aren’t anywhere near the Stark Naked production that runs through March 9 at the company’s shared home in Spring Street Studios. But frankly, watching Kim Tobin, Drake Simpson, Kay Allmand and John Gremillion put Reza’s lightning-fast dialogue through its paces, I didn’t miss the big names one bit. Every one of these gifted performers is local, as is actor/director Justin Doran, who moves Reza’s human pieces around the chess board with sensitivity to the narrative’s constantly changing moods.

The concept underneath God of Carnage is simple and rather brilliant: two 11-year-old boys (whom we never see) have a disagreement of some kind at school, inspiring one to swing at the other with some kind of stick. In response to this trouble, the parents of the swingor visit the parents of the swingee at their Brooklyn home to talk things over like civilized adults. Let’s just say that these “adults” don’t stay civilized for very long.

In some ways, there’s a nod to all those books like Lord of the Flies and films like Sands of the Kalahari – you know, the stories in which something happens that removes restrained and cultured moderns from the protections they count on, and meaningful savagery ensues. All such stories carry the message, whether overt or covert, that our controlled and polite behavior is a thin veneer indeed, and the slightest provocation will tear it violently away. Certainly, this notion is evident in God of Carnage, as even the title suggests. It is to Reza’s credit that she makes this and a few dozen other valid points about modern life and relationships while keeping us laughing the whole time. This is exactly the kind of play that Stark Naked, founded a little over a year ago by Tobin and her actor/director husband Philip Lehl, does better than just about anybody.

The set is simple and singular: a living room in the home of Veronica and Michael, the parents whose son was injured in the incident. There’s a couch,  coffee table with stacks of art books, and a couple of other chairs, plus a case that eventually yields the bottle of rum that plays such a role in the second half of the play. There are a few steps leading up in back past a vase of fresh tulips (that also gets dragged into the action) toward what apparently is the front door. The two visiting parents, euphoniously named Annette and Alan, will spend virtually the entire intermission-free 90 minutes putting on and taking off their coats as they start to leave but then let something drag them back. All four characters are on stage at the beginning, and all four are still on stage at the end – there’s a pleasant doff of the chapeau to Waiting for Godot in that.

Both script and performances offer quick, sly and moderately profound insights into each of the quartet: Veronica (played by Tobin) with her efforts to be kind, progressive, thoughtful and liberally empathetic, Michael (Simpson) with his goofy, semi-mundane, blue-collar smarts, Annette (Allmand) with her stylish, surely-we-adults-can fix-this façade of confidence and, most of all, Alan (Gremillion) with his constantly vibrating cellphone as the pharmaceutical company he represents faces accusations and struggles to respond. There are no good guys or bad guys; you will probably find yourself agreeing and disagreeing with each of these characters more than once. Even more fascinatingly, they form the oddest alliances throughout this roller-coaster of seething resentments: one couple vs. the other, husband vs. wife, and, most memorably and humorously, boys vs. girls. Since Reza is inquiring whether grownups ever actually do grow up, fights that resemble those we remember from the schoolyard are a brilliant way to ask the question.

God of Carnage seems a perfect play for Stark Naked in at least three ways, starting with the performance space. I’m sure those four movie stars (especially Gandolfini after finishing his iconic run as TV’s Tony Soprano) must have played a big New York theater to pack ‘em in, and the Alley followed suit by using the larger of its two spaces. With Stark Naked, we don’t merely observe the action, we experience it in the same room. This heightens the tension, the sense of barely suppressed violence, to the point that early on I wondered if anybody would notice if I slipped away before this party got rough.

Secondly, Stark Naked has expressed a commitment to doing shows about relationships – primarily of the man-woman romantic variety. While at first we see two couples typically committed to each other and to the overall rightness of their paths, cracks start showing almost immediately. These cracks grow into canyons as the night, the anger and of course the rum take their toll. At times, it’s hard to prove the two sets of “lovers” don’t actually hate each other.

Finally, Stark Naked expresses a passion for the craft of acting. God of Carnage lets this ensemble do what good actors do best: explore tangled, ambiguous emotions, bounce from amiability to anger, make us believe whatever the playwright is telling us. Laughing, screaming, comforting, punching, kicking and crying are only a few of the high-octane emotions that stream through this evening of theater. At no time does anybody figure out what to do about those 11-year-olds and their fight. That’s because the older children are too busy having too many of their own.

-JOHN DeMERS
John DeMers is a veteran author and journalist whose 50th book is coming from Bright Sky Press this fall. He is currently working on a cookbook with Houston father-and-son chefs Michael and David Cordua and hosting the weekly Delicious Mischief radio program heard in Houston, Dallas and Austin.